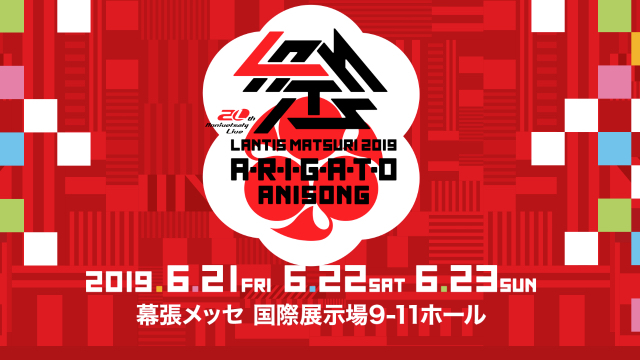 Anisong music label Lantis has announced plans to celebrate its 20th anniversary with a three-day Lantis Matsuri 2019 concert, to be held June 21–23 at the Makuhari Messe convention center in Tokyo.

In a press conference streamed on Niconico Live, YouTube Live, and LINE Live, Lantis founder and music producer Shunji Inoue announced that the theme of Lantis Matsuri 2019 will be "A-R-I-G-A-T-O Anisong," an expression of thanks to the label's fans, employees, and artists for their support over the past 20 years.

Lantis, which was amalgamated into Bandai Namco Arts earlier this year, also celebrated its 10th and 15th anniversaries with similar Lantis Matsuri concerts. The latest edition of that concert in 2014 kicked off an Anisong World Tour the following year which made stops in Las Vegas, Hong Kong, Singapore, Seoul, Shanghai, and Taipei. It has since evolved into the Anisong World Matsuri concert series organized in cooperation with Sony Music Entertainment and talent agency Amuse.

Organizers for Lantis Matsuri 2019 have begun accepting early ticket lottery applications on LINE Ticket, which will run through January 6. Lottery results will subsequently be announced beginning January 12. One-day tickets for reserved seating are priced at 9,800 yen, while standing room tickets are 8,800 yen.

Some of these artists haven't even released songs in years

Wow, this 3 day concert is stacked. I like the artists set for this one than Anisama this year. Well, Anisama is still probably incomplete so let's see.

If I read it correctly, these are just the part of the announcement (meaning, more participants will be announced later). If it is so, it's too deluxe for "第1弾" (first round of announcement).

It seems like the whole press conference archive video has been deleted.

No Pripara (but I think that's Avex), but Aikatsu, Idolmaster, and Love Live in the same venue, that's needs official livestreams badly.