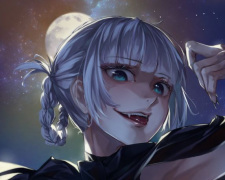 quiuzus Yesterday, 12:55 PM
I had a harem at the moment, then I realized I'm happier with only one woman
;)

Raymond_Z_Ace_11 Yesterday, 3:13 AM
Thank You So Much For The Birthday Wish... You Made My Day 💖💖💖 Very Special ...I Am Forever Grateful 💜 My Heart Is Still Smiling.

literaturenerd Oct 25, 3:16 PM
My top 10 anime and manga are roughly in order. Nothing else is including extended favorites.

TemplarXIII Oct 22, 12:41 PM
"Oh shit that could very much happen. Personally I hope it doesn't the original was effective because of the fact the game wasn't scared to kill off such an endearing character, if she somehow survives it would lessen the tragedy and the stakes at hand.

To be honest, in the original when she died, I didn't think I knew her all too well as a character despite all the dialogue. So when she died, I was a caught off guard, but wasn't really saddened by her death. However, this time around, now that she has new life inspired in her with the great voice work, I would be more impacted by her death. I wouldn't mind if she lived though. Or if they throw a red herring at the players and not have her die at the same moment in the original game, but at a different point, that could be interesting if timed well.

Good examples, but there isn't much options. Leliana wasn't even a romance option in 2 or inquisition though. Isabella was only romanceable in the 2nd game. The Dragon Age trilogy lacks the continuity of the Mass Effect Games.

"Very true Persona and Fire Emblem's romance are basically pick your waifu simulators and there isn't much depth to them, and unfortunately that's the best the Jrpg scene has right now. There are plenty of VNs in which you can choose your favorite girl to romance and they tend to be significantly more complex and well written than any Jrpg series."

Thinking about it again, it's probably too ambitious for devs to do on top of the other gameplay elements they have to juggle. One other option is just have the MC committed to one person--writing a more in depth relationship that way is more feasible as we've seen in some games. The only problem is that sometimes the devs are too timid to commit since they don't want to piss off a portion of the players. Look at what Square said about FF7R: they don't want to choose a side--Tifa or Aerith for Cloud to hook up with haha. If they opened their eyes though, they would immediately see it's the lady from 7th Heaven that is the correct choice. ;P

ArudaSenpai Oct 22, 6:28 AM
"Cole Marvin Rogers" is the name. That thought was something defined my ideology, so I decided to put it there.

spiritdudegamer Oct 20, 8:34 AM
nah , just trying to start a conversation

spiritdudegamer Oct 20, 12:24 AM
I am doing good , just watching seasonals and The Great Pretender

Bold_n_Brash Oct 19, 1:38 PM
Hollow Knight has masks, vessels, ghosts, and that dream realm. Bleach has hollows wearing masks (I'm pretty sure Ichigo gets a hollow mask or smth later in the story), vessels, spirits, and the soul society.
These similarities are quite surface level tho. I don't think there are any deeper similarities between the two thus far, they are quite different.

Bold_n_Brash Oct 19, 11:57 AM
I intend to read Bleach 'til completion (because I would like like form my own opinion about it, and because it seems to have had a lot of influence over a lot of my favourite modern shounen-battle horror series, such as JJK and Hell's Paradise), tho if I end up not still not enjoying it by, say, the midway point, I'll put it on hold and come back.

TemplarXIII Oct 19, 10:47 AM
"Well yea that's because she's in 3d now and you originally played her with those lego-shaped graphics lol."

Tetsuya Nomura's original concept art for Tifa gave me a good idea on how to imagine her in the game despite the midget polygon rendering of all the characters. It's not just her looks though in the remake though. She's more life-like because of the voice acting and her facial expressions during cutscenes--they nailed it. The same goes for all the characters too. The advantaged the original had was that you could shove a lot of text on-screen to bring out their personalities, but that was out of necessity. With voice acting, the budget sort of limits how much dialogue you can put in the game, but that limit makes the writers really think about what included in the dialogue to really bring out the personality of the characters. Trying to say a lot more for less. I personally prefer that over reading blocks of text--nothing against old school games. Games have really come a long way.

" I had almost forgotten but they actually did this twice as Britt Baron the English va in FF7R is really pretty as well."

She did a stellar job. FF7R is one of the few games where I actually prefer the English VA over the Japanese dub when given the option. 9 times out of 10, I usually play the JRPG in Japanese dub.

"If we're talking about the girls then Jessie dies pretty early and Aerith gets Sephiroth'd, so there can really only be one girl xd. Unless you want a Barrett and Biggs option lol, I guess that'd be good fan-service for some people."

Lol I guess we'll see. I mean they deviated from the original quite a bit now. Who's to say at this point if they'll strictly stick to the script of the oiriginal game. Maybe Aerith will survive? Maybe even Jessie? Biggs survived in FF7R. Even though Bigss, Wedge, and Jessie died in the original during the plate collapse. It could be wishful thinking, but we'll know for sure in the next couple of installments. I don't see FF7R going beyond a trilogy unless they really stretch it out.

"As for Arise I would recommend getting the "Ko prevention" skill in the skills menu it helps a lot against insta-death attacks, other than that Boost gauge skills are very useful as well since they allow you to use team combos more often which saves a lot of time and resources, also helps you a lot against bosses."

I just go KO prevention for Shionne but I haven't seen it on the other characters yet. I'll keep a look out for the boost gauge related stuff--especially the ones that allow you to use them more often. The skills are pretty expensive though, so it takes a while to accrue the skill points even if you do all the side quests and grind here and there--at least where I'm at in the game.

"I quite liked Arise's op but I don't think it's the best one in the series I would put it just behind Vesperia, Berseria, graces F, Zestiria and Abyss. What did you think of it and where would you rank it?"

I'm not sure. I'll have to get back to you on that. For now, it sounds almost similar to the other Tales Games. Sometimes there's a few songs that stick out for each game, but so far the OST seems like a generic Tales OST.

Ah right, I forgot about Baldur's gate. I really like that game when I was younger. Well, the one I played was a split-screen co-op game back in the early 2000's. I can't recall the exact name though.

I agree, Bioware handles the romance dialogue much better in the games. The only thing they seem to suck at is giving you attractive characters though. I remain playing Dragon Age II and Inquisition, and man, the pickings were slim whether if I played as a male or female character. Mass Effect trilogy wasn't bad, but yeah...that and Bioware's character creator sucks hard just like Bethesda's creator. Probably the best character creator I've seen in a RPG was Dragon's Dogma funny enough--and the graphics weren't all that great either.

"Interestingly enough Visual Novels have plenty of different story-telling choices you can make so Jap devs are clearly capable of it, I guess linear stories are just more appealing to the consumers over there."

Yup, there's not really an excuse tbh. All they need to do is just incorporate more of the good elements from galge/visual novel games into the JRPG, and they would be golden. I mean, even I was disappointed a little by the romance in Persona 5, and that game is basically a social life simulator with pokemon mechanics.
"

Bold_n_Brash Oct 18, 9:48 PM
I'm ~100 chapters into Bleach and it still feels as if it hasn't really even gotten started. Around what volumes/chapter(s) does it get good?
All Comments