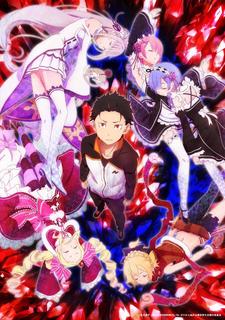 The official site revealed that the TV anime adaptation of light novel Re:Zero kara Hajimeru Isekai Seikatsu (Life in a different world from zero) will premiere in Spring 2016. In addition, the staff and cast members were announced.

Written by Tappei Nagatsuki and illustrated by Shinichirou Ootsuka, the series currently has seven volumes in print, with the latest volume released in September this year.

I've seen a lot of people compare this series to Steins;Gate and what are the odds that White Fox will be the ones animating this? Hopefully they bring their A-game.

Been extremely excited for this ever since the PV. The MC sounds perfect, the OST is glorious in it, the background art looks excellent and love the character designs. Plus the whole tragic time travel part has me highly interested. Really hoping for a 2-cour as gives more time to connect with the characters allowing the drama to be more effective (well for me it is at least).

It seems like so many good shows are going to show up in winter/spring. This one looks like it'll be good as well. Another one to the plan to watch list.

Stark700 said:
I'm actually looking forward to this and just hope White Fox doesn't mess it up...
At least the OST seems decent so far.
This

Yes! XD This is the anime I was anticipated the most and its coming in spring season! Yush!

alpha_shadow said:
so I guess no steins gate 0 in spring ;_;
Seems that way but it's better this way because Steins;Gate Zero should take a lot of time developing so that we can have great animation, soundtracks, etc.

Let the LN haters says their stuff but I'm interested on this and that's all matters to me atm.

Nice cast. But Satomi Arai really makes it stand out.

This one screams SHOCK FACTOR!!!!!

One of my most anticipated LN adaptation this year.
Wow Spring is really interesting!!
Hope White Fox give justice for this anime then we'll know that Re:Zero better than *No Game No Life*

Yay for Nakamura!
& Inori got another role, damn.

hope the mc is not as radiculus as in the manga. i heard the LN give more reasonable character.

What is this even?

I hope the main lead just went apeshit on his harem then I'll be down!!

If it can be half as interesting as All You Need Is Kill, I'll buy in.
Or if they include Tom Cruise a la Edge of tomorrow.
One of those two conditions, please.


It's much more like Tate no Yuusha than Mondaiji-tachi. And for once, the source material is actually pretty interesting. Rather than treating his ability like something to abuse for his own gain, MC ends up being trapped in cycles of getting killed and has to figure out how to not die to get out of the loops.

Nah, I was referring to the person who was asking about what "isekai" meant. Since it was capitalised in the original post I assumed it was in reference to a specific series. I haven't actually seen Mondaijitachi (though it looks decent enough) :x. But I'm an idiot and misread things.

Anyway, I think I'll be skipping this one initially, since there aren't any seiyuu in it who I'm interested in, and it doesn't draw my attention much to begin with. But eh.