Comcept was founded by Keiji Inafune, best known as a co-designer of the Rockman (Mega Man) character at Capcom. It has created games such as Soul Sacrifice and Mighty No. 9. According to Studio 4°C president Eiko Tanaka, the collaboration originated from meetings she and Inafune had on the sidelines of Anime Expo 2014. 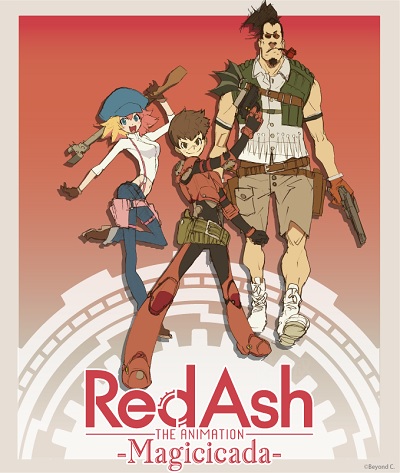 Red Ash the Animation will use treasure hunting as a story concept, and it will be in a setting separate from but parallel to the video game. Yuuta Sano, who is previously a CG animator for the Berserk: Ougon Jidaihen movies, will make his directorial debut in the project. Studio 4°C will experiment in combining 3D characters with hand-drawn paintings.

The anime Kickstarter has a total crowdfunding goal of US$2.48 million. It is composed of eight episodes of varying length, each with its own stretch goal. The first stretch goal of US$150,000 has a deadline of August 4, 2015. A ninth stretch goal is to produce an ending animation. Should the project meet its ultimate funding target, it will be presented as a feature film of at least 75 minutes, which includes an epilogue to the story.

Yuuki Kaji will voice the protagonist Beck. Supporters who pledge US$14 or more to the project will have a right to vote for the seiyuu cast of two other characters, Call and Tyger. In the game, Call will be voiced by Asami Seto, while Tyger will be voiced by Houchuu Ootsuka.

Takes a lot to make an anime.
I'm surprised its 8 episodes + a movie if they meet their initial goal.
--
They always have great animation.
Haven't made much, but they're a smaller studio so it makes sense.
-
It looks like they might kick a trend into using kick starter type projects in the anime world and then they'll start being more interested in the west. And this could make it so more anime is more widely available.

Is this the next Steamboy in terms of funds?

cool chars design :)
good luck on the project, though im more
interesting in the game.

I actually quite like the visuals. It looks fun and light-hearted.
The characters also have interesting tools.

And I like that you can cast a vote for the VAs! (Except Yuki Kaji, he's here to stay...)

ABOUT TIME I GOT SOME STUDIO4℃ NEWS

Nucksen said:
A 4°C kickstarter! I waited way too long for this and I am sure they can do great things with my mo-

Nope. Nope, Noooooope! Every Nope ever!
Pretty much sums it up. I guess they could go really crazy with the locations or...something? I dunno. 4°C pls.

A 4°C kickstarter! I waited way too long for this and I am sure they can do great things with my mo-

Nope. Nope, Noooooope! Every Nope ever!

Doesn't look quite as awful as Under the Dog nor quite as much taking advantage of how dumb western anime fans are, but definitely doesn't sound good or interesting in the least.

Visuals look nothing special. Not sure how the treasure hunting story concept might play out either. Starting one Kickstarter at a time would've been a better idea.

Oh shiet a new anime kickstarter this might be goo-

Wait, Inafune is having a part in this? Nope.jpg

I dont understand whats going through inafune's head with this, like mighty no.9 isnt even out yet and doing 2 kickstarters at once is just foolish

initial goal is a 5 minute episode. hmm. if this gets funded it's going way further into the stretch goals imo, well, to the 2nd at least, a considerable increase in money. otherwise it just seems... eh.

Studio 4°C so I'm watching this

I'm only interested in the premise based on this project. The visual so far isn't' very impressive to me.