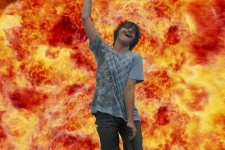 ReaperCreeper May 7, 6:53 PM
Hell yeah, with 7 I had an itch for the beat em up gameplay in Yokohama.

ReaperCreeper Apr 13, 2:19 AM
That's definitely a problem I had with Tendo. Wasn't hard, just long and tedious. Picking up stuff during normal attacks happened so seldom it almost always surprised me when it actually happened. Reckon they should add something like environmental context specific skills. And more control over position during battle wouldn't hurt either. I like how it made you want to use area attacks asap before the enemies spread out, so it'd be nice to see that evolve.

ReaperCreeper Apr 10, 3:34 AM
So I liked Yakuza 7. Gameplay still felt a lot more like tradition Yakuza than I was expecting, it had that nice punchy feeling to it. There were some encounters that were a drag with multiple enemies doing long ass animations, but there weren't too many of them. It's a solid first attempt and I would like to see them tweak and improve it in future titles. I'd still prefer more beat em ups though, because how many of those do we get compared to turn based RPGs?

Story was good, Ichiban's got a big personality and really helps sell it. Pacing did feel a bit off with getting dumped in Ijincho and just kinda forgetting about the Omi stuff until the connection pops up, and Kiryu's first appearance also made me raise an eyebrow a bit. Otherwise it tended to be fairly solid throughout, and I wasn't expecting it to work so well as both a new start and a farewell to the previous titles.

Now for the first time I'm up to date with Yakuza. Might be soon to finally take the plunge on Kenzan and Ishin.

ReaperCreeper Feb 6, 10:50 PM
Yeah, I never bothered to fight that gang leader guy unless I already had a wound, because I could never dodge all his shots. The other 3 guys were simple enough, but it would have been nice if there was more variety to rewards you get for driving them off. Like maybe some stuff that we can actually sell, or a little extra skill points. I'm not sure if I even made any extracts using that stuff they give you, outside of one instance.

I did vastly prefer tiger style over crane, particular since crane was all but useless against bosses. Annoyed me to no end how often the square part of any given combo would get limply blocked by even regular enemies, and the lack of any real stun from it. I still found its uses with crowds of weaker enemies and using its ex rush though, and I got the 1000 enemies down with crane before tiger so I must have got it to work despite my grievances.

Also wish drone races had more courses, since they were pretty cool, and drones fights were drastically underused. Think it was only in one side case, two if you count having to shoot that one pervert on the wall, and the easy VR missions. Probably need to be fleshed out a bit more if there was anything more though. And I would have liked more variety in the VR courses, but they were decent for what we got. Fuck that wareme mahjong friendship condition though, I used the cheat item and it still took me 25-30 minutes before I actually got the wareme.

Anyway, that Amon fight went fucking hard. Stealing the phone was such a cheeky move, and having to work around that really made me appreciate the fight. Might be in my top 3 Amon fights.

Now I can move onto 7 sometime, but I'm also thinking it might soon be time for me to finally give Kenzan a shot.

ReaperCreeper Feb 5, 6:29 AM
Aye, finished the story. Reminded me of 4's story in quite a few aspects. I liked how Hamura ended up being a much more tragic character than expected, still on the real dark side of grey if you wanna call him that, but seeing him set up as this top dog only to quickly get the bluster knocked out of him worked really well. Also the Mole was surprisingly a lot more intimidating once the mask came off, just the absolute viciousness he exuded really sold him as this deranged sociopath, especially during the final chapter where he seems to think he's still in control while just going on a slaughter. Was really refreshing to not have it tied down from anything Kiryu related.

Combat felt real nice once I finally had enough fights to get a feel for it all, which was a while since when I was 10 hours in I still felt it hadn't really opened up yet, and I think it was another 5-10 before I really had it grasped, especially once I upgraded the combo speed and ex meter build up. Wall jumps and vaulting over enemies, when I didn't forget about them, gave a nice dynamic feel to fights, even if the two styles aren't quite as versatile as 0's, so Yagami feel distinct enough from Kiryu while still having a familiar feel.

I liked the idea of mortal wounds, I just wish there was more options for treating them or something. I didn't get hit by them that often, so I wouldn't mind too much, except when it comes to guns since it annoyed me whenever some guy in a group managed to pop off a sneaky shot on me when I didn't even realise he was packing. Reckon they should have had bullet proof vests or something to equip to prevent mortal wounds from bullets.

Just gotta finish up the side cases now, and maybe some other activities and I'll be done with it for the time being.

ReaperCreeper Feb 4, 3:50 AM
Of all the characters from previous games to show up, I wasn't expecting the gimp.

NewYearSameMe Jan 27, 7:40 PM
Yeah, user hasn't been on since 2017, lol, looked through his forum history and dude was a hardcore Gintama fanboy. Still has screenshot of what I assume is your profile page from back then. This one... https://i.imgur.com/yBOV24Z.png

ReaperCreeper Jan 27, 4:21 AM
Aye, started Judgement. Haven't played that much yet, but I'm surprised how much combat has taken a backseat so far.