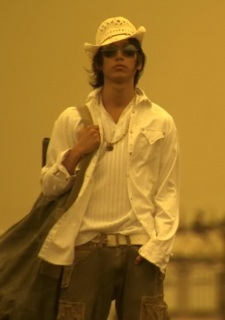 Amberleh Jan 3, 1:41 PM
HAPPY NEW YEAR FRIEND! <3
I'm watching Nabari No Ou finally, and remembered it was on your favorites so I thought of you <3

Ezekiel_01 Jul 11, 2020 12:56 AM
I feel the setting of Bakemonogatari is kind of lifeless and dead. The scenery is lovely and all but it feels the background only serves as a stage rather than a setting or an environment that will influences it's characters. I ok with Hidamari Sketch and Arakawa Under the Bridge since it feels the setting has values. But for Bake, it feels like the story and character is the only thing that is important. And everything else is irrelevant and just serves to present the plot and story. Feels like spoon-feeding for me since they will describe some conversation in a more convenient way. Like what does Rape Look Like? Many Hands touching a girl without consent you dummy. Like that just to express how deep the conversation is.

Ezekiel_01 Jul 7, 2020 5:16 AM
Yoh! What's your opinion in Bakemonogatari? For me, it's a good show but I do get bored since the show is pretty much minimalistic on its animation there are literal frames that it is more picture slide than an animated work and such reuse slide from time to time which kind of makes the series seems it's on animation budget. Well I would say the characters are decent enough with their own little background story but I do have some bones to pick with the super generous protagonist who only sole purpose is to save every girl he encounters but glad he chooses a girl that confess on him and not being a pussy about commitments which quite uncommon given it was made by SHAFT. But it more than reminds me of Sayonara Zetsubou Sensei in most of its visuals and cinematic styles. But I do get bored from time to time. I really do like the good combination of real-world psychological issues and the application of supernatural entities to further explore and expand the internal conflict each female protagonist foregoes.

But to be honest I don't see the first season amazing as most people do. Sure it has some good points to talk about but I assume they called it a masterpiece as the franchise itself and not season 1 alone.

Ezekiel_01 Apr 17, 2020 4:07 PM
Back into the anime community again. Because of the ongoing global pandemic, well let say. Staying inside is mandatory. So I spend most my time watching anime and it also gave plentiful amount of time to write reviews again.

Ducat_Revel Apr 15, 2019 6:37 PM
I watched 5 episodes of YKA and didn't have it in me to finish it. Saddening because I really do like it when Ikuhara works but I'm afraid I'm not feeling that from him anymore. Also, yeah, my birthday is considerably less stange. Thanks again.

Sieg_Hitle_98 Oct 7, 2018 12:06 AM
Well I ddn't find Fa as irritating or annoying, same goes for Katz (though he's a goddamn idiot). However don't take my words lightly since I'm the same individual who didn't find Slippy annoying in the starfox franchise.

Sieg_Hitle_98 Oct 6, 2018 4:48 AM
Thanks, I'll keep that in mind about CCA, Also I want to bear mention that I mixed up the names and I was meant to say Emma instead of Reccoa. Though yeah, the arc with Reccoa isn't so bad. Besides she had more of a character compared to the other female cast (besides Haman Karn of course).

Sieg_Hitle_98 Oct 6, 2018 2:01 AM
Also speaking about the closure, what do you think of Zeta's ending? I'd say its a little too compact for its own liking. Some of the characters I felt needed a little more development like Reccoa, to leave some impact on the ending. Including some of the antagonists such as Bask. Though to be honest some of the characters should have been cut, for instance Rosamia felt more like a replacement for Four Masume instead of a fully realised character. I mean she has a child's instinct and amnesia that leave some of the audience to pity her but thats it.

Also the relationship between Char and Kamille leave much to be desired. I wanted more of a dynamic between the two, instead of the characters sometimes taking two separate directions.

Sieg_Hitle_98 Oct 6, 2018 1:23 AM
Hmm, I may consider watching the series again sometime. Mostly because of obligation and curiosity, I mean why leave the series hanging when the next two films in the U.C time line require previous knowledge.

Sieg_Hitle_98 Oct 5, 2018 11:07 PM
Your whole selection is pretty fascinating, especially ZZ thats an anomaly. Not to judge, but what makes it so special might I ask.

Hias Feb 4, 2018 8:16 AM
Ah, big oppai pleb over here. I like Rukia's personality but there are other cool female characters, like Soi-Fon, who I also really like.