Crowdfunding for 'It's My Life' Anime Adaptation Reaches Goal 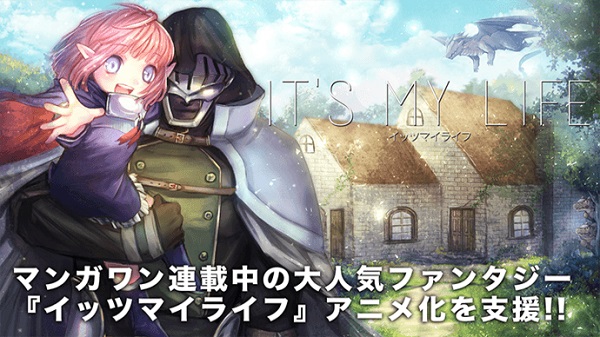 A crowdfunding campaign for an anime adaptation of Imomushi Narita's It's My Life fantasy manga exceeded its initial goal of five million yen (approximately US$46,000) on Friday to produce a three-minute episode with an ending animation. The campaign currently stands at 6.6 million yen with the end goal being an eight-minute episode, which would include both an opening and ending at 15 million yen (approximately US$138,000). Shogakukan launched the campaign on the Makuake website on Sunday last week, and it will end on April 25, 2018.

The story centers on Astra Ludger Doomsday, a 35-year-old former captain of the royal knights who retired early and used his savings to acquire his very own house. However, not long after beginning his peaceful life, a young girl crashes into his house. The girl named Noah, is an apprentice witch, and mistakes Astra for the evil God.


Narita launched the manga in Shogakukan's Ura Sunday web magazine in December 2014, which also runs in the company's "Manga ONE" app. The series currently has nine volumes in print, with the latest volume published on December 12 last year.

IT'S NOW OR NEVER,
I AIN'T GONNA LIVE FOREVER

I didnt even know about it,

I haven't read much of this, but I am still excited about it! What I read was funny and charming and I would gladly read more of it!

anemonespotte said:
crowdfunded but they couldnt add an english sub for pv
thx but no thx

Why do they need to?

I enjoy reading the manga, but releases take forever to come out. I would absolutely love to see Noa's true identity and power.


Swagernator said:
That moment when the crowdfunding must take place for an anime adaptation.

Rarely do viewers have a chance to directly effect the fate of an adaptation, and indeed for a studio to put forth the resources needed to make such a work. This sort of crowd funding I would actually put money into.

Honestly, I think if a proper studio can get their hands on this project, they can make it at least into a 1-cour adaptation.

Looks really cute but the setting looks like a generic fantasy. I haven't read the source material but given the low crowdfunding goal, I'm pretty sure this is gonna be a minimalist short. I hope at least it's funny enough to hold my attention.

OMG fuck yes! I have been waiting fo this!

now it's time for me to read it again

It looks fun but with only 3 minutes...meh.

Is it to much to ask that maybe we might get a full tv series after this? if the interest is their maybe they should. it is a good Slice of life series that makes u feel good.

Oh this is rather cute. Not the best looking wise but I think it looks decent.

This actually looks rather nice ^^