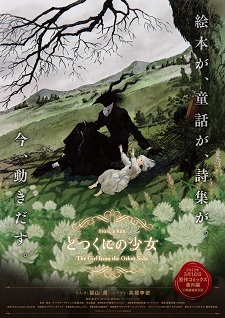 Production company Twin Engine announced a feature-length original video anime (OVA) for Nagabe's Totsukuni no Shoujo (The Girl From the Other Side: Siúil, a Rún) manga on Friday. The special edition of the manga's side story volume will bundle the OVA on March 10, 2022.

The feature-length installment serves as a continuation to the 2019 short OVA produced by Wit Studio. The animation studio will launch a Kickstarter campaign on March 10, seeking to raise 3 million yen (approximately US$28,000) by May 9. The fund will be used to improve the production's quality and further expand its promotion.

Yuutarou Kubo and Satomi Maiya are returning from the short OVA as the directors, scriptwriters, and character designers. Club Jazz trio Schroeder-Headz is once again composing the music at flying DOG.

A little girl named Shiva, an Insider, is found by an Outsider she comes to know as Sensei. Though they cannot touch, Sensei cares for Shiva as best he can, and together they live a moderately happy life. But soon, Shiva not only finds herself in danger from the Outside, but from her own kind as well. [Written by MAL Rewrite]

Nagabe began drawing the dark fantasy manga in Monthly Comic Garden in September 2015 and concluded its five and a half years run on Friday. Mag Garden released the tenth volume last September, with the 11th and final volume scheduled for release on April 9.

Seven Seas Entertainment licensed the manga in English in June 2016 and published the ninth volume on October 27. The tenth volume is scheduled to ship on April 13. The manga has also been published in multiple foreign languages, including French, Polish, and Spanish.

Totsukuni no Shoujo was nominated for the Best Comic award at the 45th Festival International de la Bande Dessinée d'Angoulême in 2018.

Amalik0029 said:
Calal-Chan said:
I haven't been this excited about something in a long while. The 10 min OVA was already nice but this with a Kickstarter gives it the potential to get a full series if the Kickstarter does super well.
what is Kickstarter , I don't get it !?

What is a Kickstarter or where?

A Kickstarter is something that allows fans to help contribute money to the project and support the product. This support shows them how many people are interested and helps them financially too.

Where? Here is a link. https://www.kickstarter.com/projects/witstudio/totsukuni

High hopes even with different key staff comparing to the previous short OVA.
The 2019 short was quite charming so I hope this will offer some good time, hard to believe that Wit would fail with something like this. Looking forward to it!

I haven't been this excited about something in a long while. The 10 min OVA was already nice but this with a Kickstarter gives it the potential to get a full series if the Kickstarter does super well.

Neat. I didn’t expect this. Is this manga sad? Something I need to know before I dive into the manga.

While I don't have faith that the manga will ever be fully adapted, I'm very excited to see this. This is easily my second favorite manga, so I'll obviously be giving this a watch when it eventually comes out.

I hoped it would be full length TV series which adapts the whole manga but the OVA with same staff and style as the first short is also something to look forward to!

Very happy about this. OVA was very good granted quite short a feature length OVA is great but I hope it can lead to a full series even if the chance is small.

Stoked that they announced this! And i'm even more excited to see how the manga ends :)

Damnit I still have to watch that OVA that came out almost 2 years ago now first... as well as catch up on the original manga...
Speaking of that, I do like the original manga a lot so I'll put this on my PTW list too :D

It's really nice that this manga is getting recognized.