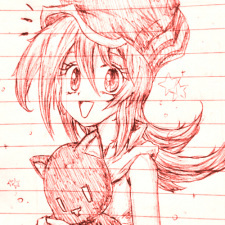 zeroyanagi Jul 28, 4:26 PM
OH YEAH I FORGOT THEY MAKING AN ANIME ON HIM NOW I CAN ADD HIM AS MY CHARACTER, THANK YOU SO MUCH DAWG!!

glamazon Jul 24, 3:25 PM
Wanna past this wall? Then just have an incredible taste. It's accepted. Can say the same about you - not everyone has Princess Tutu, Sailor Moon, a TWEWY character, Futatsu no Spica and SatoJun as faves at the same time.

emergencybacon Jul 15, 10:26 PM
Yeah I used to be on the forums all the time, but I rarely ever get on anymore. I realized I was spending more time talking about anime than actually watching it lol.

emergencybacon Jul 14, 11:59 AM
Hey there! Thanks for bringing one of my forum games back from the dead lol. At least for now.

sogegesoge Jun 25, 11:27 PM
eyy hello there fellow friend. oh ho my pleasure tho it's pretty much the average taste lol. you seem like a magical girl fan, that's cool

AmaTenshi Jun 15, 2:27 AM
How did you get into those series? Let's think... I'm not sure, but I think that Cardcaptor Sakura I've started to read because it's pretty famous shoujo manga (that time I've searched a lot of shoujo's). Anime I've watched after completing manga, I liked that story was longer than manga, and 2nd movie was really cute! Also, I was very surprised when new anime and manga was announced! But most shocked part that they've returned old cast that was 20 years ago! It's difficult to believe that all cast returned, because 20 years is really long time span! I can't believe that it's already 4 years passed! It's prorably my favorite mahou-shoujo series.

Talking about Madoka Magica, I'm not big fan of this series, but I really like music writted by Yuki Kajiura. When I've first time heard Credens Jusitium my heart was pounding so fast! It's my 3rd favorite anime OST! Especially, I liked that it was writed in Kajiurago, language that Kajiura created by herself, for me it's best thing in Madoka Magica series.

Princess Tutu I've watched pretty recently. I heard about it in past but hearing it's name I though that it's something childish. But after reading the plot, I understand that it's not like that. The main reason why I've started to watch Princess Tutu was that Fakir was voiced by one of my fav seiyuu's Sakurai Takahiro. I also like how it ended, and opening performed by Ritsuko Okazaki was really gorgeous!

AmaTenshi Jun 13, 3:45 AM
Hi. It seems that we both like Angel Beats!, Cardcaptor Sakura and Princess Tutu, it's pretty rare, so nice to meet you! ^_^

CureDream Jun 9, 11:42 AM
It's okay. I also do that tbh. Sometimes idk how else to respond to a person I wnat to interact with