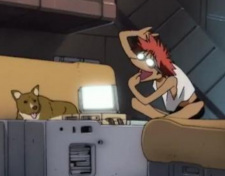 DsMasterBR Jun 23, 2021 9:39 PM
Thank you! I really like the people you have on your favorites, I'm also a big fan of Shichiro Kobayashi, Shinya Ohira, Kouji Morimoto, Kazuto Nakazawa and Norio Matsumoto. Obviously Anno and Watanabe are great too. Wow, almost all those guys worked on Genius Party. Those movies rallied so many cool directors and animators.

I don't know if I have a huge preference for shows with emotionally complex characters, but I'd say it's definitely a plus whenever it's the case. I see you've got Kemonozume and Mind Game on your plan-to-watch, in my opinion they've both got memorable and interesting characters, even if they're not fleshed out completely as would be the case for longer series. They are super fun and despite the craziness of the plot, the characters are refreshingly realistic. I'd also recommend Kara no Kyoukai as a series with good and complex characters. This one is way more serious and complex in terms of plot too, but I think it's a very nice watch. And finally this season's SSSS. Dynazenon, great show, with great realistic dialogue and a nice artistic touch. All the characters have distinct motives and backgrounds and the way they used visual storytelling and body language to convey their feelings was nothing short of amazing. Akira Amemiya's direction style is admittedly very much inspired by Anno's, I think you might like the show.

nyysd May 13, 2021 2:03 PM
You're welcome. One thing I'd like to point out, though: For some reason people assume for Schwizgebel to utilize paint-on-glas, but he doesn't. Virtually the entirety of his oeuvre is either acrylic paints on cel, crayon/dry-pastels on glaspaper, or a combination of both. Cheers.

_Cybex Apr 18, 2021 2:02 PM
Oh, thanks a lot! I've really liked both of the FMA shows, although for very different reasons. I don't like to compare the two, since I think they weren't even trying to achieve the same things, but almost going in the opposite directions instead. It'd be almost like comparing Hunter x Hunter to Monster, which wouldn't be a fair comparison. At the end of the day, even though I've immensely enjoyed both, FMA 03 has a much more special place in my heart than its successor. Just as you said, it feels more human.

As for Master Keaton, it's been a while since I've watched it and it has mostly faded from my memory, but I still remember it as a fun experience. The focus in MK is on the detective stories and mystery, but the psychological and philosophical themes we've all liked in Monster are present too, although to a noticeably lesser extent. It's an episodic detective story, but a really great one at that! Also, it's worth mentioning that Urasawa didn't write Master Keaton all by himself, and was only illustrating it and sharing ideas with the team, for the most part.
Still, Master Keaton and Monster are really similar, and I think you should definitely watch it when you find the time! I didn't notice any differences in tone or quality between the original series and the sequel OVA. I guess it makes sense to start with the original show. Then, if you like it, there will be 15 more episodes waiting for you!

MeNombreJeff Apr 13, 2021 4:31 AM
Thx for the recommendations. I definitely gotta check out lupin 3 and vampire hunter d, already heard a lot about those shows so ill give it a try. FLCL and Redline have been on my list for idk how long. Ill watch Redline next when i got time.
Honestly i dont really have a preference regarding anime, which i kinda hate, but if its good ill probably watch it. A lot of the mainstream anime dont really stick with me like jujutsu kaisen or demon slayer, they‘re good shows but i dont have much fun watching them. So if you got any niche anime worth watching just tell me.
About the Gantz manga i watched some videos on it, the art looks really interesting, especially the monsters design so ill give it a read.
Thank you again for the recommendations i really appreciate it. Helps a lot.

MeNombreJeff Apr 8, 2021 9:25 AM
man your anime and manga stats are insane. i really gotta start reading manga (always wanted to read berserk). if you got any recommendations for me, just tell me.

failsnail Apr 4, 2021 2:36 PM
I cannot overstate how much I like Nisio Isin's layered character writing and thematic richness, but also how Monogatari is actually so wholesome in the end because of this exact message of self-acceptance and acceptance of each other. Especially the season of Nisemonogatari might seem just perverted on the outside, but it has some great messages about how much all the characters and especially the siblings actually care for each other; they don't mind the others being "fake" (having flaws), and still accept and thus love each other. Later in Monogatari the principle of self-acceptance becomes more predominant, especially involving Araragi and Hanakawa, but the themes stay strong and well-explored.

failsnail Apr 3, 2021 4:41 AM
Girls' Last Tour definitely is one of the best anime and manga out there. Despite it's grim aesthetics it's just so uplifting and full of thematic depth in how it depicts the girls' perspective on the world. It's really a shame that the last 2 volumes of the manga haven't been adapted. The anime already is amazing, but if it would have included that memorisable but perfect ending it could have become an instant classic and masterpiece.

It's really a shame indeed how little recognition especially Karen gets. There are so many anime about children who aim to become altruistic heroes, but it's often forgotten just how difficult it can be to be righteous and how naive these young characters can be. This isn't really bad in itself, because child-like optimism can be a great thing, but many of these hero stories often just neglect how being a hero needs an adult and nuanced view of ethics in the real world. Karen to me is great embodiment and to a degree even parody of this: the dorky, naive, childish, and arguably stupid, yet still inspirational and wholesome hero of justice we see in so many stories. I especially love how she's to a degree self-aware of this, accepting her own ignorance in the end.

Memore Mar 5, 2021 7:39 AM
Hi! Thank you too! I definitely recommend to start learning anime with Candy Candy. It is a must see for everyone.

That being said, I actually watched it alongside the other Tomoyasu Murata shorts at a screening over at a local place I frequented, back then. I have no idea where to find it and iirc there were a couple of shorts screened there that aren't on MAL at all, specifically I remember this series about youkai that I couldn't find on here or anywhere else. It's been a couple of years so my memory of it all isn't the greatest, but I wish that Murata's stuff was easier to get ahold of. It was a really interesting experience for me and I feel like these kinds of shorts in general are a bit underappreciated.