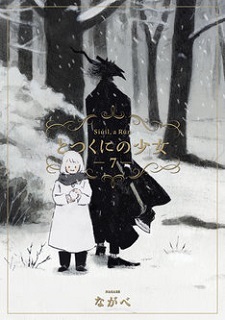 A short art animation adaptation for Totsukuni no Shoujo manga has been announced. It will be bundled in eighth volume of the manga to be released on September 10. Wit Studio will be producing the short anime with Yuutarou Kubo and Satomi Maiya, who worked on Ribbon key animation, as video directors.

A little girl named Shiva, an Insider, is found by an Outsider she comes to know as Sensei. Though they cannot touch, Sensei cares for Shiva as best he can, and together they live a moderately happy life. But soon, Shiva not only finds herself in danger from the Outside, but from her own kind as well. [Written by MAL Rewrite]

Totsukuni no Shoujo is by Nagabe, which serialized via Comic Garden magazine since September 2015. Seventh compiled volume has just released today on March 9. Seven Seas Entertainment has been publishing the manga in English as The Girl From the Other Side: Siúil, a Rún since January 2017, and seventh compiled volume is scheduled for August 27 release. There are also French, Polish, and Spanish release for the manga.

Remember looking at this in the recommended section of my usual "to go" librairy.
The art immediately grasped my attention I decided to read the first 2 volumes to see where this was going ... gosh is it such a good take on a simple premise.

I hope this would lead to something bigger like a TV series cuz it deserves too.

Sounds solid in oremisse and animation.

Since is short, does not hurt to give it a try.

Well, I didn't know how much I needed that. I love the style and I've seen soo much cute pictures from manga, I can't wait! <3

Definitely got some Mahoutsukai vibes to it from what I've seen. I'll be looking forward to this.

mahoutsukai no yome also get ova first. this probably a test how successful it will be.

A full series for this one would be better!

The key visual looks pretty dark. Looking forward to it.

I don't even care if it isn't an entire series, I'm just really glad it got noticed by a studio in the first place.

This is a beta test for a TV anime, right? Since the art style is so out there, they obviously have to see if it's actually DOABLE before throwing eggs in its basket, right?

Ahh, the screenshots provided look so beautiful! I love this manga a lot, absolutely great news!

I'm glad to hear, Yuutaro Kubo getting the opportunity to work on one of my current favorite mystery fantasy manga, sounds promising.

Mythologically said:
_MushiRock11_ said:
Oh, the key visual sort of reminds me of Mahoutsukai no Yome but the synopsis suggests otherwise.

It's actually really similar to Mahoutsukai no Yome. Totsukuni is pretty much a darker, less romantic version of it.

Oh, is that so?
I’m definitely looking forward to seeing this then.

Sounds good, looking forward to it.

_MushiRock11_ said:
Oh, the key visual sort of reminds me of Mahoutsukai no Yome but the synopsis suggests otherwise.

It's actually really similar to Mahoutsukai no Yome. Totsukuni is pretty much a darker, less romantic version of it.

I hope this manga wins a TV anime one day

Oh, the key visual sort of reminds me of Mahoutsukai no Yome but the synopsis suggests otherwise.