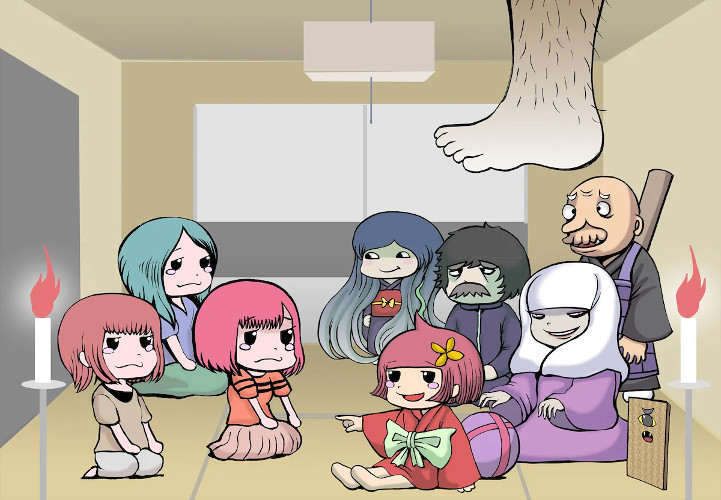 A crowdfunding campaign is underway for a new anime from mangaka Rensuke Oshikiri, whose works High Score Girl and Pupipo! were adapted into television anime in 2013 and 2018, respectively. Titled Zashiki-Warashi no Tatami-chan, the new original anime will mark Oshikiri's directorial debut. In addition, he will be handling the screenplay, art, original character designs, and debut as a voice actor in the role of the main character, Tatami-chan.

Zashiki-Warashi no Tatami-chan is a horror gag comedy that follows the titular character, a foul-mouthed yet adorable spirit who lives with ghosts, youkai (supernatural spirits), and humans in Tokyo. The title is based on "Zashiki-Warashi," youkai resembling red-faced children from Japanese folklore, most often discussed in Iwate Prefecture where Tatami-chan lived prior to moving to Tokyo. The prankster spirits are said to bring good fortune to those who see them.

The Oshikiri-led production will be animated by studio Zero-G (Grand Blue, Tsugumomo). The project has a goal of 5,000,000 yen (approximately US$45,800) on the crowdfunding platform Makuake and, as of this release, has accumulated 810,000 yen (approximately US$7,423) with 49 days remaining. Zashiki-Warashi no Tatami-chan has been guided by a production committee over the past two years, with roughly 12 episodes scripted so far. Oshikiri has expressed that the funds will be allocated to improve the product, and that regardless of its success on Makuake it will be produced.

As an incentive to support the project, there are various pledge tiers with rewards that include merchandise such as keychains, t-shirts, and Blu-ray packages. A pledge of 500,000 yen or more will include a production credit for an unspecified episode, and other packages still available will include an original drawing of the backer depicted in the world of Tatami-chan.


Update November 14
The main cast members were announced on the crowdfunding page on Thursday.

News Update
The main cast members were announced on the crowdfunding page on Thursday.

Tatami-chan is funny. I love this =)

I'd love to support her future works. I enjoyed her respect for gaming in Japan mixed in a romantic comedy in High Score Girl. Awaiting for the next big project.

Oh, this seems interesting! Always pleasing to see such projects prevailing, so here’s to hoping this will too!

@Only_Brad, the red text at the bottom of the credits in the PV states that the animation and audio are different from the final product. As was stated in the article, the creators hope to improve what they have with support from the crowdfunding. The art style may change, but it will probably look similar to this.