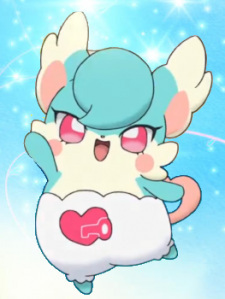 Ezekiel_01 Jan 9, 3:19 AM
It also made 12 episodes or 24 episodes anime running above 20+ sharing the same genre elements looks pretty dumb in comparison too. That's why I giving it more appreciation now. The anime seems to have the potential to give us more story but I cannot say since the source material hasn't been translated yet on the open internet. But I will surely read it someday either having learned the language or a fan translation get released.

Ezekiel_01 Jan 7, 7:29 PM
Good Thing to Start the Year by Rewatching the ONA Eve of Jikan
7 Years ago I thought the show was just decent
Now I gave it 8/10 Now since its really that good than most anime today that tackle the same concept

RulyKinkajou59 Dec 11, 2021 1:34 AM
Sup Etude! You probably have never heard of me, but I just wanted to thank you for influencing my rating system because I keep switching my scores lOl.

Also, thank you and staff for your efforts in AWC as always!

Dang, looks like I completely did not understand the Neat Freak restriction. I've read the instruction post many times but I guess I was still confused lol. I don't have the time to watch anything else to meet my Bingo goal. It's okay, I still had fun. Thanks for explaining and sorry mine was such a mess.

Ezekiel_01 Nov 25, 2021 7:54 AM
Didn't expect how many jumps in both technical and writing quality the 4th Season of Gintama. Also instead of ending it in a light and funny tone like most of the previous season and movies. Gintama o decided to end on a very serious tone which I sort of like and a better direction for the show.

Gonna Watch some random anime movie first before I proceed.

Cozye Nov 22, 2021 6:50 PM
I actually kinda liked Suite, at least compared to most of the other seasons. The character designs and overall aesthetic were pretty nice in my opinion. Kinda sad there's not more Precure now but I have been rewatching some of it recently.

Also how's Sailor Moon going for you? I've been thinking about trying other magical girl shows like that one and Cardcaptor. Not sure though.

Cozye Nov 22, 2021 1:26 AM
So I got around to finishing almost all of the seasons. Only ones I haven't done are Futari wa, Splash Star, and Yes season 2. They just don't interest me. There were some I greatly enjoyed, others not as much as I would've hoped but understand why others do (Heartcatch and Hugtto). Star Twinkle is still my favorite of them all though.

Vogel100 Nov 16, 2021 10:43 AM
I haven't watched the other stuff the dude makes and probably won't find out unless I'm really bored and/or feel like I need to massively drop my mean score for some reason. As someone who gave Utsu Musume Sayuri a 6, I can't really judge you for not hating it. :P For me Sayuri was entertainingly bizarre while Shitcom is gross and nothing more. Also it quite literally can't get shittier.

I quite liked the first season as well, but I definitely wasn't expecting that to turn into one of the shows I'd give a 10/10. For me there's actually a bigger difference between the second and third seasons though, third season has too few mountains and the character drama feels a little standard to me. I hope the coming fourth season will be closer to season 2 again. I usually walk in the mountains in the summer vacation and ski in the winter vacation, but I've not really climbed up high and it's usually always the same mountains, so maybe that makes me a passive enjoyer as well. Now I feel like I wanna do a bit more with mountains at some point, no mountains in my country unfortunately. Anyway as far as the CGDCT aspect goes, I especially love Hinata and Aoi's friendship. Instead of the often idealized friendships in anime, they constantly tease each other and argue but in the end have each other's back, actually makes it feel like a stronger friendship to me.

Strike Witches 2 is really good at doing what Strike Witches does best, which is being fun and having good characters and relationships and fan service, and I like the Italy setting as well. It still has the weaknesses of the plot and main character not being great, but everything else is so good that I kinda don't care. Second seasons often tend to be the best in my experience, either that or the third.

StrikerS is quite different from the earlier seasons yeah. One of the things I really like about it is how it's more mature, and by that I don't mean it's darker, but it literally has themes you deal with later in life like caring for a child, having a job, dealing with work politics, how putting in too much effort can be bad. Sounds boring when I say it like that but it's more of the underlying feeling rather than all there is to it, really helped me get more excited for adult life when I was in my in-between phase in university. Also I really like seeing all these characters when they've grown up, it's not often a show does that, adult Nanoha is best Nanoha (and Nanoha is my favorite character).

I think I'll just try watching the Precure shows in release order when I get to them unless there's a strong reason not to. I'm not actually a big shounen fan either, so being more similar to shounen isn't at all a guarantee I'll like it more. Stomaching typical romance drama tends to be my weakness as well. Then again I do really like Strawberry Panic but that's more because of everything except the romance drama (also the drama doesn't seem to take itself too seriously and it's yuri).

I like your rating system, it would be pretty similar to mine if I had one. I try to finish everything though, so for me the top question would more be the Is it Bad one. (It is also funny how your rating system forces Shitcom into being at least 5/10.)

I also like your taste as a fellow magical girl and Yama no Susume second season fan. Do you like mountains too or is it just super good at being a CGDCT show? For me it was kinda a combination of those two things that makes me love it, makes me wanna climb the mountains there too. And nice Strike Witches ratings. Although there are some shows that I loved that you didn't like, Nanoha StrikerS being the biggest one, but I know that one gets a bit of a mixed reception because of how different it is from the previous two seasons.

I have still only watched very little shoujo despite having watched quite a bit of mahou shoujo. Only Cardcaptor Sakura, which was pretty good but I didn't love it too much, and Cutey Honey F which wasn't good. I'll get to Precure and stuff eventually, I wonder if I'll find a shoujo I love or if it'll just keep being the seinen ones.

Me too, looks like it's gonna be great XD

Cocoa_Hoto Oct 13, 2021 6:18 AM
It's cute. I've been enjoying that anime a lot lately and wanting to continue PriPara anime too XD

Cozye Oct 9, 2021 3:08 PM
Well I think that's mostly personal preference to be fair. Some I might find more enjoyable others don't. But right now, I'm favoring some of the more recent seasons compared to the old ones.

Cozye Oct 8, 2021 7:58 PM
I have a strong inclination to, not quite sure yet. A few of them I have on indefinite on-hold until the right time but I plan on trying to finish at least a few more.
All Comments