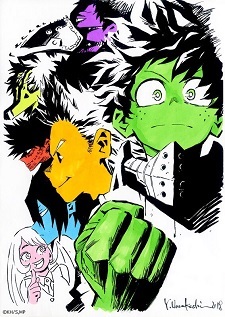 The 25th and final episode of the third season of Boku no Hero Academia aired on Saturday ended with an announcement that a fourth season of the series is in production. Animator Yoshihiko Umakoshi drew an illustration (pictured) to commemorate the announcement.

Weekly Shounen Jump began serializing the superhero manga by Kouhei Horikoshi in July 2014. Shueisha published the 20th volume on September 4. The manga currently has a cumulative 15 million copies of its compiled volumes in circulation.

Produced by Bones, the 13-episode first season debuted in Spring 2016. The consecutive seasons premiered in Spring 2017 and Spring 2018, respectively; each running for 25 episodes. The 13th and 14th volumes bundled two OVA episodes in April and June last year. An anime film featuring an original story opened in Japan on August 3.

VIZ Media licensed the manga in English under its Shounen Jump imprint in February 2015 and has since been publishing the series in their digital Weekly Shonen Jump magazine. The 15th volume will go on sale on October 2.

Funimation licensed the anime series in North America and released the first season on a Blu-ray and DVD volume last April. The second season was shipped in two volumes on April 3 and June 5 earlier this year, respectively.

Boku no Hero Academia was nominated in the eighth Manga Taisho and the 40th Kodansha Manga awards, placed fifth in the male readers' category in the 2016 Kono Manga ga Sugoi! rankings, and won the 2017 Sugoi Japan award in the manga division.

I am very glad to see this fine classic series continuing and look forward very much to seeing how they do with Season 4 it is a fine effort and an excellent story that takes many well known memes and makes new with them all.

I am happy to see such strong and perceptive support and of course a bit sad that some just dont get it and need to try to rain on the parade. Waste of time ...and energy,.

good is good, great is great and this show is both good and great!

I am eagerly waiting for The Fourth Season.

Ink Paintings of the Characters
https://natalie.mu/comic/news/346506

I just can't fucking wait this season.This will be my first season where I'm watching as the anime progresses and not watch the entire season in 3 days.Man I'm sure I'll have times when I will really want to see the following episode after watching the current episode(I hope that makes sense)!

No surprise at all. Happy that it is continuing. Probably one of my favorite animes currently airing.

i get the sense heart break is on the way and i can't stand waiting. guess i have to read the manga now.

I'm not surprised, but I am happy.

Tbh i didnt expect a 4th. I thought that that 3rd season was a nice finisher.

That was fast! they gonna catch the manga in a brief.

In other news, the sun rose this morning.

I don't think I'm going to watch the 4th season...well I said the same thing but I still watched the 3rd season but with thebaxta the reactor,I don't know,I can't seem to get into it. but we will see,if Uzumaki Khan or thebaxta reacts to this maybe I will watch it.

Oh damn. How about 4th season of Haikyu, JUMP?