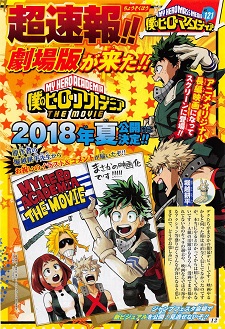 The 2nd and 3rd combined 2018 issue of Weekly Shounen Jump magazine has announced on Monday that Kouhei Horikoshi's Boku no Hero Academia manga series will get an anime movie in Summer 2018. An official website and Twitter account have also launched.

The movie will feature an original story supervised and original character designed by the mangaka himself and center on the Class A characters, as well as show the past of a certain character that hasn't been revealed in the manga yet. A key visual will be revealed at the Jump Festa on December 16.

Boku no Hero Academia has been serialized in Weekly Shounen Jump since July 2014. The series currently has 16 compiled volumes in print, with the latest published on November 2. The manga has received two anime seasons by studio Bones, which aired in Spring 2016 and Spring 2017 for 12 episodes and 25 episodes, respectively. Two OVA episodes were bundled with the 13th and 14th compiled manga volumes in April and June earlier this year. A third season is scheduled for a Spring 2018 premiere.

Viz Media has been releasing the manga in English since August 2015, and published the tenth volumes on November 7. Funimation has licensed the anime series for North American distribution, and released the first season in a single Blu-ray and DVD volume earlier this year on April 18.

@JDxRIPPERZz yes, season 3 in Spring and Movie in Summer.

So correct me if i'm wrong, were getting both season 3 and a spin-off movie in 2018?

New key visual.
Title will be Futari no Hero
It will be the summer between 2nd season to 3rd season.
Premiere August 3.
https://natalie.mu/comic/news/275017

I'm excited to see who the girl with the blond hair is. She looks like Mt. Lady imo

I’m a Boku no Hero fan, but i’m very worried about this movie, I think it isn’t a good idea. The anime/manga is new, there isn’t a good plot for the movie yet, i think they should wait more seasons. It’s fucking great when the anime has +50 episodes.

nice but no news for the Dragon Ball Super movie in 2018?

@lofnedda OH HELL YEAH!!! thanks for the summon lol

So, it's an original story supervised by Horikoshi! Regardless, I'll always excited for more Bakugo!!!

Alright! I will pray every night for some Katsudeku moment starting from today lol. Please God Bones and Horikoshi-sensei!!!! Make the wonder duo work together or something!!! Bakugo would totally be the MVP just like in both OVA lol

I have no doubt, it'll be one successful movie and they will hopefully make more in the future!


Swagernator said:
Every battle shounen need it's own movie.
Feelsbad for Jojo man.

Original story rather than continued adaptation though... Even if supervised by mangaka random additions sort of annoy me, because it means it isn't crucial to the overall story. I'll still be excited though; I'm sure they'll make it really fun. Substitute teacher, maybe?

Oh yes,this is going to be a blast to watch.

If this movie will be out in summer, does that mean that 3rd season will be only 12 or 13 episodes ?! How they will work on movie and 2nd cour at same time ?!

Every battle shounen need it's own movie.

HYPE! I was wondering when Academia would get a film.

If this has anything to do with Nana I'm sold. And the fact that Hori is excited and working on it is already the best thing about it.