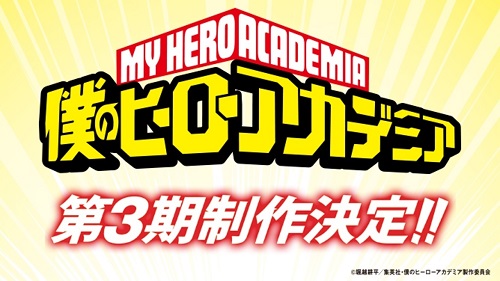 A third season for TV anime Boku no Hero Academia has been announced at the end of the final episode of the second season. More info will be revealed at a later date.

The manga is written and illustrated by Kouhei Horikoshi and has been serialized in the magazine since July 2014. The series currently has 15 compiled manga volumes in print, with the 16th volume to be shipped on November 2. VIZ Media has licensed the manga in English and has published nine compiled volumes, with the latest released on August 1. The manga has inspired two TV anime adaptations by studio Bones. The first season comprised of 13 episodes and aired in Spring 2016, followed by a 25-episode second season that aired from April 1, 2017 to September 30, 2017.

Can't wait to see some of the scenes from the manga animated! I'm really looking forward to it!

Excellent news! A really great anime! I would love for the other animes to follow this example and make an adaptation consistently for one season every year.

They are really on fire with this series, one season gets announced right after the previous ends lol. Not that I mind it, I'm in the middle of the first series and it is pretty cool and fun to watch :>

I assume it's gonna be next year?

Ahh I'll do my best avoiding spoilers! (I won't do the same mistake with SNK! Got spoiled big time, 3 years was hard)

Not that I'm complaining, heh!

As expected. I'm looking forward to it.

Nice to have a confirmation.

Honestly this a great approach to a shonen adaptation just make one season every year consistently.

Is there anyone that didn't expect this?

Cool. I'm guessing it'll air either in Fall 2018 or Spring 2019, since they just finished a 2-cour season and want to try not to catch up to the manga.

Expected that but definitly a welcomed news

SO MANY SEQUELS FOR MY FAVORITE ANIMES!!! SO FUCKING HYPED OMFG... THE HAPPINESS!!