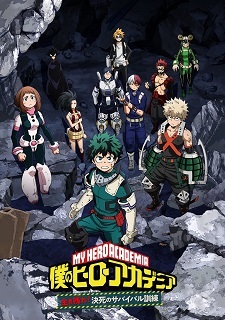 The episode will stream in two parts on Hulu on August 16, followed by d Anime Store, U-NEXT, dTV, Anime Houdai, Hikari TV, J:COM on Demand, TELASA, milplus, RakutenTV, Tsutaya TV, Videx, Geo TV, Niconico Channel, Bandai Channel, Video Market, and MovieFull Plus on August 30. The Sukue! Kyuujo Kunren! and Training of the Dead original video episodes, which were bundled with the 13th and 14th manga volumes, will also be available for streaming at the same time.

North American anime distributors Funimation and Crunchyroll announced on Sunday that the platforms will also stream the new episode on August 15. The latter will debut the two-part episode at 11:00 a.m. EDT.

The episode is based on the recital drama of the same title that was performed by the cast members at the U.A. High School Survival Camp event at the Bunkyou Civic Hall in 2018.

Synopsis
In this brand-new adventure, some Class 1-A students are sent to hone their survival skills at a training course. Having yet to receive their provisional licenses, they're eager to cut loose and have a little fun.

They quickly discover that the danger they face is no simulation! It's going to take their combined training, teamwork, and quick thinking if they're going to pass this assignment! (Source: Funimation)

The anime series adapts Kouhei Horikoshi's action superhero manga, which drew inspiration from his Boku no Hero (My Hero) one-shot that was published in the 2008 Winter issue of Akamaru Jump. Weekly Shounen Jump began serializing the manga in July 2014. Shueisha published the 27th volume on July 3, with the 28th volume scheduled for release on September 4. Boku no Hero Academia has a cumulative 27 million copies of its compiled volumes in circulation.

The first television anime aired in 13 episodes in Spring 2016, followed by the second, third, and fourth seasons in Spring 2017, Spring 2018, and Fall 2019, respectively—each running for 25 episodes. The Futari no Hero and Heroes:Rising side-story films premiered in Japan in August 2018 and on December 20 last year. A fifth anime season is currently in production.

VIZ Media licensed the manga in English through its Shounen Jump imprint in February 2015 and serialized it in their digital Weekly Shonen Jump magazine till it discontinued. The company's new Shounen Jump platform now simulpublishes the manga with the Japanese release. The 24th volume was released on June 2.

I'm shocked these were licensed. The previous OVAs may have hope yet.

So does this mean that Funi/Crunchy might also release the first two ova's eventually? or just the 2 new episodes...? ;v;

How does such a mediocre show keeps getting adaptations?

Dope I think a world wide release of an episode is a neat idea. It makes it a worldwide event that allows everyone to discuss the show. It is like TV but for anime. Now do vigilante series!

I probably watch it, I hope it's good.

Someone posted a screenshot from the pv of Shouto and let me say this..

I just want a Vigilantes: My Hero Academia anime.... There's enough content for about four cours...

Sure, why not? More BnHA is always welcome.

2 part episode does that mean this will be at least 45 or 50 minutes in total? thats nice if true