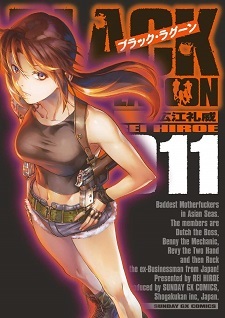 Hiroe also launched a new manga titled 341 Sentoudan (341 RMR Battlegroup) in Gessan's July 2019 issue. The youth war drama follows young people who stake their lives on the battlefield. In the midst of a large scale war where major powers clash, the story centers on a certain person who stands at the forefront of a combat unit.

The mercenary action manga entered an intermittent hiatus in mid-2010, with two chapters published in 2013 and 2014. Hiroe had resumed the manga regularly in May 2017 before it returned to hiatus again last August. The series was originally scheduled to resume in Spring, according to Sunday Gene-X's December 2018 issue.

Black Lagoon began its serialization in 2002. Shogakukan published the 11th volume (pictured) last November, the first volume in four years, since the 10th volume was published in May 2014. The manga has a cumulative 7 million copies of its compiled volumes in print.

VIZ Media licensed the manga in English in 2008 and shipped the tenth volume in April 2015.

JokerVentura said:
Nice, I wonder how far into a new arc he will get before going on another hiatus.

Hiatus X Hiatus has some competition it seems.

never knew how dejected people are with the hiatuses. I thought people were always optimistic for this series.

A third season of the anime, perhaps?

If it is a new anime it will probably be an OVA like Roberta's Blood Trail, but with 4 episodes as the last arc was a bit shorter.

"The announcement also teased more planned surprises for the series."

A third season of the anime, perhaps?

i like his work on the original anime Re:Creators too

great can't wait for the next hiatus!

I needed this happen knowing that it must be one of my favorite.
anime list thank you for your service and Anime - On

Nice, I wonder how far into a new arc he will get before going on another hiatus.

I love, love Black Lagoon, but all these hiatuses kill the interest in following the manga. I hope that Hiroe comes in with a plan to give it a good ending instead of just producing some pointless new arc.

I am overjoyed! haha ... I have been waiting silently for the series to resume.. and it finally did.. hahaha! :)

It was sometime in May that I decided to have a check and lo and behold there were new chapters up.. and had to read them straight away. :)

The only manga I have any interest in :)

At least he works on other projects.

Had no idea this was even still running. Don't have any interest in it anymore, but good for the fans.

Hiroe starting to rival Miura in terms of hiatus.

Hope we get new season but seems unlikely to happen.

Yeah I am hyped.Hope he delivers a good arc.

Is there anyone really following this? I lost hope already.