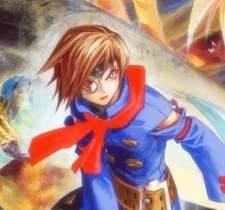 Sarukah Jan 2, 2013 8:32 AM
I haven't seen Fafner, but I know what it is and have thought about watching it many times. I always thought it looked kinda interesting, good to hear that it actually is, haha. I'll see about watching that one the next time I start a series thats already done airing. Thats awesome too that its getting a sequel series, I hope its good!

I've played some NIS games and was never a fan of Disgaea either, but I have been following news about the new game you mentioned and it does look super fun. That was the first actual gameplay I've gotten to see; I'm looking forward to it a lot more now! Thanks for the trailer!

Sarukah Dec 30, 2012 7:13 PM
Taking breaks from screens is so hard to do nowadays, its so boring unless you do house chores or something, haha.

Ohhh okay, I'll remember the seeding part then. Dont want to get banned.

Thanks, you did make Tactics Ogre sound a lot more interesting than I had originally thought. It sounds like a lot of fun when you're looking for that type of game. I definitely look forward to playing it now. I picked up FF Crisis Core and FF Tactics on clearance for 5 bucks a piece so maybe when I'm done with those I'll get Tactics Ogre. I'm on the last battle in Crisis Core, tried it once and failed and havent tried it again yet. That game was okay and interesting from the perspective of one who hasn't actually played FF7, but saw the Advent Children movie. My gosh that movie was confusing since I never played the original game. I actually have it lying around here as well as a PS1 memory card, is it actually worth my time/have you played it?

I want backwards compat too, it always scares me to death to think that my little PS2 is the only thing I have to play all those epic games and memories on aside from trying emulators which probably wont work as well. I just got my PS3 last Christmas and so far only have 5 games for it, so I'm in the boat of needing more worthwhile games as well. Thats funny though, I've been skipping over those same 3 series for the same reason of them looking mediocre too. I feel like the Ar Tonelico games would have been fine, but not great, I would really like to try the Aterlier games, but I'm just not sure how good they'll be, and Agarest War seems pretty mediocre yeah.
My opinion on Lightning Returns is that I am looking forward to it. I did play 13-2 and enjoyed it. It wasn't an overly amazing story or anything, but its a quality game and is perfectly playable. The monster system was..interesting. I didnt care much for keeping up with getting/making stronger and stronger monsters which, unfortunately, really screws you as you get further. Overall it was pretty challenging and I liked it well enough. I'm actually kind of excited about Lightning Returns, the whole so many days and replay system sounds really fun and different. I tend to think that I enjoy the games for what they are because I was never into the Final Fantasy series to begin with. I never had a PS1 and I just never got into most of the ones that came out for the PS2. I played the first 10 minutes or so of both X and X-2 (borrowed them from someone), played 12 and kinda hated it, and thats the extent aside from 13. I hate reading people whine about 13, its so annoying. Story-wise, the first game was fantastic aside from a really confusing ending and the second one was just alright.

I'm pretty random on MSN. Sometimes I'll be on every day and sometimes I won't sign in for a week. I'm not on right now, but my handle is Sarukah/crystalsky42.

It does look like an odd show. Cool that you enjoyed it, but lame that it had a rushed kinda ending. I might give it a shot sometime, thanks.

Haha, I wasnt expecting a russian site. I guess that makes sense with the "Ru". I'm signing up, but havent gotten the email yet (if I did it right), whats after that?

Ohh, I wanted to get Tactics Ogre sometime. Is it good aside from the slow and tediousness? And dang, stinks to hear about how it messes with your eyes so bad. I've yet to have distorted vision, but it does kinda make my eyes tired. One of the first games I got for the PSP was P3 Portable which still takes me over 100 hours to beat that game even though that was the third time. Thats when I learned that it was a terribly uncomfortable experience. It kills my arms to hold it up to my face mainly.

Sarukah Dec 30, 2012 9:39 AM
That combat did look fun, I feel bad for the guy playing though, he had no idea what he was doing.
I feel the same way about not being able to take portables as seriously too. So all in all its like, terrible to hold and even try to play for hours and then not even nearly as good game quality as consoles. There are only ever a few games that are worth getting. I'd love to get P4 Golden if I ever get a Vita, but frick am I not looking forward to a 100+ hour game on that tiny thing.

Graces' price actually did drop (surprising, I know). You can get it new for $40 at Gamestop and Amazon has it for around $47.

Sarukah Dec 28, 2012 10:05 PM
Ah, thats cool that people did that for the series. But yeah, I waaaaaaaaay prefer the English voices myself, especially for KOS-MOS. I don't really care for her japanese voice. And the english cast was just so fantastic (sans the weirdness on the second game). Wanting to replay the series after so many years in Japanese sounds fun though, I would do that. I'm just not up for modding my PS2. But yeah, send me the torrent anyways, thanks! I might try to emulate it.

Haha, I actually had a lot of fun with all of those quests. Following a guide for the general location of each item made it a lot easier/more enjoyable. I fought the last boss on the level 99 cap and if it hadn't of capped at 99, I would have been way above that as well. I know I didn't complete every single achievement, I believe I only missed like 5 of those. I did finish rebuilding Colony 6, that was cool. I only remember having real trouble with one of the materials; had something to do with getting some yellow dust cloud to spawn in the jungle area which took a lot of effort.

I thought Hearts looked like a great game, but I don't actually know anything about the story or the characters. I think I played like the first 20 minutes on my R4 back when it came out and that was it (wasnt any fun since I couldnt understand it). I'm very much awaiting Phantasy Star for the PC, it looks like fun. I would like the Vita to do well, but I'm not entirely attached yet (well I havent gotten it yet either). I've found in more recent years that I have a hard time playing portables. Its just so freaking uncomfortable to hold them up after an hour which is horrible when playing long RPGs. I do wish the PSP was still going strong here :/ Freaking stupid culture of SOMETHING NEW IS OUT, THAT MEANS THE OLD ONE IS TRASH. I can't believe FF Type-0 never even made it over here. I hope they do some kind of port of it or something so it does make it over.

I thoroughly enjoyed Tales of Graces. While the story isnt particularly deep, it was pretty awesome and I absolutely loved the characters. I think Graces had the best comedy between characters out of all the Tales games I've played. The battle system was also the best battle system out of any Tales game I've played so far. I will absolutely miss that system when Xillia comes out. If you have the money and time for it, you should definitely get it. It was a great quality RPG, no reason to miss out on it.

Sarukah Dec 26, 2012 9:36 PM
Yeah, I've seen you in a lot of random places like when Adriasang died. I only had two people I spoke to on msn, you being one of them so I know that feel.

Aw, that sounds pretty cool. Did you play them all on emulators? And did they have subtitles or was it completely japanese? And I do like that, yes.
Yes, I most definitely played Xenoblade. I think we had talked about it a little bit, I think I remember you saying you had finished it before I had and then I didnt see you on after that. I did every single quest in my first playthrough so it took me a good two solid months to beat it, but I thought every bit of it was freaking fantastic. The only gripe I had was that I got to level 99 before the final boss so I beat the final boss in like under a minute which was really disappointing.

I am excited for Hearts R, yeah, but not as much as I should be since I originally loved Hearts for using sprites (I friggin love sprites) and the upgrade looks stupid. Also the freaking slim chance that we'll get it has my expectations lowered to nothing.

Sarukah Dec 25, 2012 1:09 PM
Merry Christmas, man. Haven't seen you on msn in ages so I've been wondering how you were doing! Hope things are going well for you. Have a Merry Christmas!

Sarukah Jul 18, 2011 7:12 PM
After watching the second episode, the more I think about it, the more I like Penguindrum, dang. One of the best shows this season for sure, you were right.

Sarukah Jul 18, 2011 12:35 PM
So. Going off the first episode, Penguindrop was a million billion times better than I thought it was going to be. I kinda thought the show looked pretty crappy and that fanservice was a huge point of the show; I was totally wrong! I really really liked it! Awesomeness!