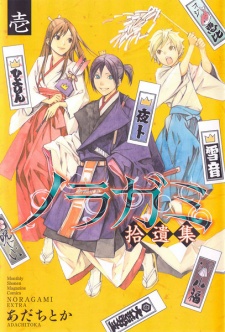 It has been announced that upcoming manga volumes of Noragami and Nanatsu no Taizai will bundle new anime discs.

Noragami has two OVAs planned, to be bundled with the 15th and 16th manga volumes on November 17, 2015 and March 17, 2016, respectively. The first will feature the chapter, Nijikan no Teikei ni So Koto (Following A Stereotypical Two Hours), from the spin-off series Noragami: Shuuishuu (pictured right). The second will be based on the 41st chapter of the manga, where the main characters pay a visit to Capyper Land. Previously, a 2-episode OVA was released in 2014. The first episode adapted the 25th chapter of the manga, and the second episode adapted the cherry blossom-viewing arc.


Nanatsu no Taizai's new OVA will be bundled with the upcoming 16th volume of the manga, to be released on August 12. The anime disc will feature side stories of the main characters in omnibus format. An OVA episode featuring the sin of greed, Nanatsu no Taizai: Ban no Bangai-hen, was previously announced to be bundled with the manga's 15th volume. It will be released on June 17.

More HiroC and not complaining. The Noragami OVAs were top-notch and I expect the future 2 eps to be just as good :3

can'T wait for the noragami ova

So excited for more Nanatsu no Taizai!

So the wait for Noragami s2 will be quite long. Well, OVAs will do.

I like both, looking forward to that OVA of chapter 41!

yessss, give me more noragami

Nice. I'll be watching Nanatsu no Taizai after Kiseijuu.

Looking forward to when the Noragami OVA's come out, I really enjoyed that series. Nanatsu no Taizai sounds interesting too, I might check that out as well.

I hoped the nanatsu no taizai ova was about the vampires sidestory....i want to see scanor in anime T_T