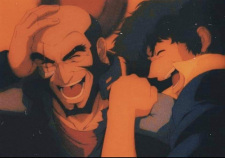 lancelot200 May 29, 6:07 AM
I definitely felt like it could have been a stronger series with just a few more episode in the later half of the series. You gave it the same score as me. Would have been a 9 for me if I didn't feel it a bit rushed toward the end.

charmecia5 Mar 27, 2014 6:35 PM
oh yeah. Sailor Moon will always be the show to me. Plus it got me into anime (along with Speed Racer, Dragon Ball z, Pokemon, Gundam Wing, and Inuyasha and others).

OkabeScientist Jan 14, 2014 8:24 PM
To think some of my comics are still in the front page, hehe. Did you ever get to watching anything from Samurai X?

Crunchyroll just fixed itself, so I don't think there is a lot you can really do until it decides to work. >.>

I was having that same problem for a week or so on PS3 and on PC. I think it's on their end. A fair amount of users were having problems

The Shinobi World War Arc is still going on in the manga?

EsdeathIsWaifu Dec 26, 2013 6:48 PM
I really hated the Bleach filers that I've seen. I'm too OCD about skipping episodes though >_>

Yeah, free members can only see some of the manga. I'm an anime user and I still can't see it all. I can send you a gift pass if you need one.

I wonder how much longer Naruto will go on for

I think one of the saddest scenes I can think of off the top of my head is when Naruto finds out about Jiraiya. Especially when he's sitting outside the store with the popsicle. When Naruto comes back to the village after defeating Nagato though...Oh man, the feels. Finally being recognized by everyone, a great moment.

Bleach was the first anime I started watching besides the stuff everyone watched in the 90s/00s. I've been meaning to get back into it, but it's been about 5 years. I stopped watching it when I stopped watching Naruto. All the shitty fillers, and waiting for weeks just to be rewarded with even more filler. I never meant to take this long to get back into them, but I just kinda fell out of anime after that until this year. It sucks that the ended the anime though :(

I find it hard to read manga online. Just seems odd to me. I might try it again now that Crunchyroll has manga on their site.

That sucks the last few chapters haven't been very good. The very little I know past the Shinobi World War arc seems pretty interesting. Save for someone dying ;(

I like a lot of the characters, but I really like Naruto. I love his positive attitude towards everything, even after all the shit he's had to deal with.

Like when he was a kid, and they show him alone and he's eating his cup ramen, and he's still all "Itadakimasu!"

EsdeathIsWaifu Nov 7, 2013 1:11 PM
I ended up deciding to watch them all. The six tails arc was awful. The enjoyed the Konoha History arc though.

At least I have that one to look forward too.