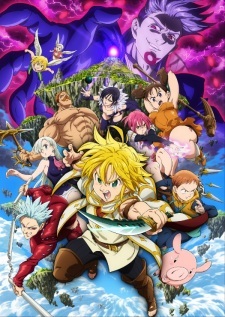 Amazon Japan has listed that 34th volume of Nanatsu no Taizai manga, which is scheduled to release on November 14, will bundle a new OVA.

Nanatsu no Taizai has been serializing on Weekly Shounen Magazine since October 2012. 33rd volume has been released on August 17. The series has received anime adaptations by A-1 Pictures, which first season broadcasted for 24 episodes in Fall 2014. A 4-episode TV special was broadcasted in Summer 2016, followed by another 24-episode second season this winter. 2 OVA episodes were previously released on Summer 2015, bundling in 15th and 16th volumes. A movie adaptation featuring an original story written by the mangaka has premiered on Saturday.

Well, as the manga going to its end, hope the 3rd season is announced.

Would love if it was an adaptation of Vampires of Edinburgh.

I hope season 3 won’t be announced any time soon. I don’t want them to fucking rush through things AGAIN.

Glad to see this, and hopefully this sets the platform for the announcement of a Season 3.

Seeing how the story is wrapping up within an year, with not much material left until conclusion, i would be glad if they didn't take as much time to return with Season 3 as they did with Season 2

Probably will not be content from the manga, but even if that is not going to happen, I wouldn't mind another TV specials like the ones of 2016 before a possible third season (if that happens one day, of course). Better if they adapt the arc that happens after the point where the second season ended.