ClariS Restarts with Karen as a New Member 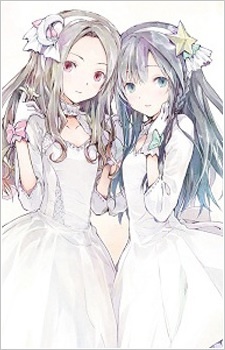 Five months after the announcement that one of Claris' duo, Alice, will graduate from the J-pop idol unit to focus on her studies, the nineteenth volume of LisAni! magazine announced a new member. Karen, who is also an active high schooler like Clara, will replace Alice.

On January 7th, ClariS will release their eleventh single, "border," which will be Tsukimonogatari's ending theme.

It was also announced that the new ClariS will make an appearance at the LisAni Live-5 Music Festival, along with Kalafina, KOTOKO, ZAQ, fripside, Suzuko Mimori, and LiSA.

Infatuate said:
I still don't get what kind of person throws away fame to focus on studies.

I liked Alice a lot. Sad to see her being replaced, but Karen doesn't sound bad at all! I'm sure I'll get used to her as they continue to release singles. She and Clara go well together. :D

I didn't even hear about Alice leaving. So seeing this news first makes me both sad and happy. Hopefully Karen can fill the big shoes left for her.

So they are Clarin now right?


GarLogan78 said:
I suppose that celebrity culture is just different in Japan, but in America I don't think two middle school girls could be secret celebrities for like 5 years without ever being discovered by fans or the media. It makes me sometimes doubt that ClariS is actually what they say it is.

They sound much older than they are supposed to be.

Its probably just a synthetic duet they created with a fake backstory.

I suppose that celebrity culture is just different in Japan, but in America I don't think two middle school girls could be secret celebrities for like 5 years without ever being discovered by fans or the media. It makes me sometimes doubt that ClariS is actually what they say it is.

Well it sounds weird by I'm sure it's not a bad thing ^-^ ill be looking into the new stuff!!

Will miss their other style though.

It should be ClaRen now xD

Are they really highschoolers? :p

Well, at least ClariS is back, but I'll miss Alice.

That's good. I hope to hear more things like Connect and Colourful in the future...

EasyGo-er said:
The first new song sung by Clara and Karen, for anyone interested: http://www.youtube.com/watch?v=w2LQbQF5p1A

Honestly I don't keep up with Artists a lot so I didn't know Alice left ClariS. And with that I never realized how many songs I actually enjoyed by them.

I listened to their new single with Karen and I do enjoy it but when I went and tried to compare to other songs with Alice I'll say I do prefer them with Alice. But with Karen will grow on me and I know I will be able to love their new stuff just as much as their old.

Hope Alice's studies go great. And hey maybe we may hear from her again when she is finished with her studies. Maybe this time come out as a solo artist and actually reveal herself. No one would ever know. :D

karen sounds similar to Alice to me, but definitely different. Still I miss the old ClariS. :(

Well, it seem they going to sing for Nisekoi season 2 then.. :3

Honestly, I can't even hear the difference. I could never tell apart Clara or Alice in the first place. Still sad the group changed though.