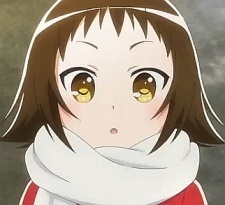 Mormegil Jan 29, 2015 11:53 PM
Difficult to say whether or not Yuri Kuma will be as good as Penguindrum(especially since Penguindrum was 24 episodes or so). I'm also curious to see how Ikuhara's going to do with a single cour anime. Hopefully it'll have a good middle and end. So far, it's been a lot of fun.
And very weird, of course.

I hear you. Anime's definitely a good stress reliever.

Mormegil Jan 27, 2015 11:36 PM
Haha no! I'm only a masochist when it comes to watching terrible anime. I continue to watch some shows without dropping them. Like Cross Ange!
But lately, that's been changing.

I do the same. Rarely do I ever get into any arguments on here. And to be honest, there's not much discussion on MAL to be had.

Yeah, I agree. Slapstick physical violence can be funny. In Working, for instance, it didn't really bother me. The bullying in Shigatsu, on the other hand, was a little too much. It made me laugh when Tsubaki threw Kousei in the river when they were both children, and there was that whole scene with her telling her friend that he was okay with being forced to jump in, when he clearly wasn't! And then she proceeds to bash him afterwards. Man...that was bad. Lately, though, the show's been good. There haven't been any bullying moments and Kousei's been dealing with trying to move past his mother. Plus, the performances are always great.

You like those moe battleship girls, huh? =P
Will do! I'll definitely pick it up on the PS4.

You're not watching Lesbian Bears(Yuri Kuma)?! I'm surprised...
You gave Penguindrum an 8, so you might like it. Another Ikuhara anime.

all the time lol.
All Comments