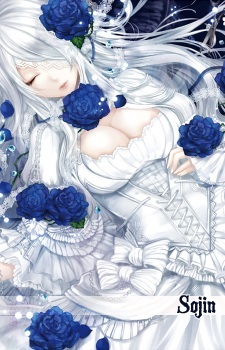 SheyCroix Jan 13, 7:55 AM
It does sound amazing. I hope I get a chance to go at least once in this lifetime ♥

SheyCroix Jan 10, 6:52 AM
Fair enough, about the space thing. Also yeah, I imagine it was more worth it to travel all around than to buy many things that would make it hard to carry. A shame about the party, but hopefully you guys still managed to celebrate it~

SheyCroix Jan 3, 10:20 AM
Better late than never, no worries~
Wow I'm so glad for you! It's so great that you were able to take the trip and enjoy it the most.
How was New Years over there? Did ya end splurging more than you expected too? xD

Wow time really does fly. The other day you barely started uni and now you are already working. It's wild.
Nooo, don't become a full normie! xDD (joking... kinda ;D)
I'm glad that you are doing well, overall. Really. Also very glad that regardless of everything, you are still around these parts.

Well, no. Not really.
I left the MAL AWC team and had someone else take over as host some time ago by now. I stayed in the challenges club tho! So mostly running that more passively.

Life has been... life ^^;
Much to do. Not enough time for things. Working, working. Taking care of the fam and all that. Just dealing with the ups and downs from life as they come. Overall is alright, thankfully =D

SheyCroix Jan 7, 2022 2:14 PM
Your master!?! woah, has that long passed? I feel like when we last talked you were barely starting unir or something lol
wooo! congrats! Good luck. I really hope you are able to ace them, get to pick what you want and go to the one you wish to.

Husky dogs are so cute as it is. I can't imagine how much pretty must she be. Hope it goes well with that too, those tend to need lots of attention, no? xD

I'm doing alright, despite the ups and downs from life. The usual, I guess? Hahaha
Mhmm not much interesting to say besides that, sadly. Still living in the same place. On a new job since we last chatted. That has been going alright, albeit it's not related to what I studied (classic /s). The fam is doing well too.
Just enjoying life at my own pace, albeit things can get hectic and a tad too busy for my taste... but at least those are things that makes one feel alive, you know that feeling? Sometimes things are a tad too boring, making one feel like the tedious routine it's tiring. Thankfully I have managed to come to enjoy things as they are. To enjoy the little things I have, that I encounter. The people I meet, those that come and go. Such things so that life ain't that bad anymore.

whew, I feel that last bit got a bit philosophical there lol

SheyCroix Jan 1, 2022 6:24 PM
yaaay glad to see you! ♥
Ofc! You ain't someone easy to forget (and that ain't in a bad way haha)
This have been alright, lots of things since we last chatted so wouldn't know were to start xD

Hope you have been doing well with everything~

I'm a week late, but happy birthday buddy! I'm really bad at keeping up with these things on here.

KitsunehimeMilhi May 30, 2021 6:56 PM
Don't worry about that. I'm no where near as active on here or with watching anime as I sued to be either. :D

I think I was debating about trying Koikimo before everything started, but I decided, "fuck this season, I'll just take my one show". I didn't actually get through much of my backlog of a plan to watch list or catch up on my reading, though. I just did so many different things on mobile games or a little bit on the switch. I stopped caring about My Hero a little bit through the end of season 3. I honestly really cared about Todoroki and or Bakugo and never really cared much for Deku, so once it started shifting almost fully towards him, I shifted out. The initial seasons were still really good as a whole, despite not liking season 1 that much myself, but yeah. We're not killing you. lol. It's great that you're doing grad school , though. Good luck. I hope it pays out. You'll learn to balance work and school, even though I never really did, but I should've got a different job then just a work study back then; it would've been hard without a ride, though, unless it was near the campus.

Better to be social then just binge watching shows a lot. Even texting friends about games is at least being a little social, so I guess I'm covered between that and work. rofl.

I'm just working my normal job. It's not much, but it's better then no money and I mostly like the people I work with, on my shift, anyway. My one other work buddy and myself cannot really stand anyone from night shift (the type of people just does like a whole 180 from mostly people who to the problems). I've been getting back into doing max raids on Pokemon Sword and Shield myself, so we've both gotten back into playing something more. I'd rather do some mostly easy raids while auto farming on a game compared to just auto farming. Unless, I'm watching something I auto-farm, I hate just sitting there doing it. Other then that, I'm still playing Azur Lane, Fate Grand Order, Duel links, etc. I tried to boot up my old laptop to finish Nekopara volume 3 after a few years, but it wouldn't stay on, so I looked on steam and found out they made a volume 4, and ought the bundle. I need to play through those and a couple other games. I don't care if I'll be playing the censored rather uncensored volume 3. The h-scenes in Nekopara are more funny then erotic, anyway, so they don't exactly add or take away from it; you pay extra money or go through a process to add the scene files in, to come out neutral anyway. lol.

Well, good luck with the classes, and with catching up on shows before they start.

KitsunehimeMilhi May 26, 2021 7:28 PM
I know you're not as active as you used to be, but my birthday wish from about 10 months ago is seriously the last comment? I was checking my friends stats for the new non-Rimuru slime isekai, and came by from there. If you liked episodes 1 and 2, you should definitely continue. I'm not just saying it because it's all I'm watching. lol. I haven't looked at your seasonal watching list, but you're probably watching more then me, even if you're not caught up. I hope you're doing well. You got someone who'll talk, on here, outside of real life friends.