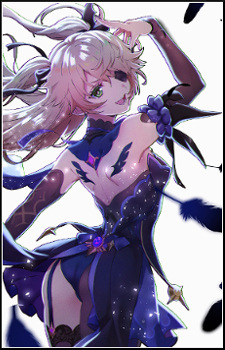 Xionea Apr 28, 2021 7:15 PM
Really? I don't think I ever died from the cold in Dragonspine. The mechanic wasn't fun, but it was slow building enough to be tolerable.
Mmm, yeah I guess a 50/50 could work. But I don't think map bosses should drop them at that kind of rate. The weekly bosses yeah, maybe even guarantee at least one gem? Idk, wishful thinking. I've only ever had one drop twice lol.

Genshin pity system is a blessing. I think all gacha games should have a system like that. FG/O is especially cruel because I think it statistically has some of, if not the worst gacha rates out of any game (correct me if I'm wrong). But they know us weebs are suckers lol. Genshin's main issue tho is the pitiful amounts of primogems they give out for free.

Whales are what keep the game alive, I salute your service! I'll take my opportunity to rub it your face and say I ended up getting Yanfei in one 10 pull. I took the chance with some free ones I had and was rewarded with the waifu law advisor! ...But I didn't know she needed those boss drops from the Primo Geovishap, which I literally fought one time when it came out then promptly forgot about so she's not gonna be leveled for awhile lol.
Ugh, see, that's what's frustrating to me. Keqing getting the event banner makes me think the others will eventually too, but maybe they only did that cause they had a lull in the event banners and didn't want to bring back the old event characters too fast. I might go ham on Eula's banner tho. It's sad that I'm prioritizing a permanent character over an event one lol.

Xionea Apr 27, 2021 9:20 PM
Whoever developed the cryo domain on the development team is a masochist for sure. Klee is an explosive stamina fiend, so taking it away from her in that is hell lol.
Idk, I like getting the 5 star artifacts from boss drops. I don't grind for artifacts as much as I should (player level 55 and only my Klee and Ganyu are built really good lol), so I like them as exp fodder.

Gacha gods are only nice to me in games I only play for a little bit. I had to quit FG/O after half a year cause I literally had THE WORST luck in that. Best unit I got was Ruler Martha. Otherwise I usually get really nice pulls in games I quit after like a week. That's probably where all my luck is being spent :/
You're just gonna rub the Mona-shaped salt in my Mona-shaped wound, huh? I swear, the second she gets a guaranteed banner I'm gonna whale hard. But hopefully I pull her during another event banner since I never get the banner character first lol. Eula banner give me some pity please! I'm scared to pull on the Zhongli banner cause if Childe's banner taught me anything, I'm not gonna pull the new 4 star waifu and be one 5-star character I don't want richer.

Yeah it probably is harder than it seems. I'll give them a pass on it for now cause they put out content REALLY fast, they're probably already putting too many eggs in their basket as it is.

Xionea Apr 24, 2021 11:17 PM
Some of the domains are especially tedious. I specifically hate the talent material one that drops the icicles on you, draining all your stamina and slowing you down. That one suuuuuucks. I totally agree with the ascension materials need to have better drop rates for the higher ones at higher world levels. I wouldn't mind at least a single guaranteed 4-star chunk each boss fight. At least the dust was introduced to switch them over so it's not the worst grind.

Good lord, give me some of that RNG luck lmao. Gacha is cruel to me. Most of my 5-star pulls are near pity odds besides Childe who I pulled on 12 while going for Rosaria and wasting my event banner 5-star guarantee... Still a little sore about that one. I've only spent money to get Klee and Ganyu (love them to death, but they aren't my girl Mona who refuses to come home) cause I honestly don't care about the 5 star guys besides Venti, who I don't have, yet the game keeps giving me them lol. I've got C1 Diluc and C1 Keqing, no C6 besides Noelle and a couple other 4-star guys I haven't bothered to build yet.

Yeah, hopefully they can implement cross server interaction. I'm guessing that'll get considered once people start doing less multiplayer stuff and they need a way to boost activity. But I'm not expecting that to happen for quite awhile.

Xionea Apr 23, 2021 10:45 AM
I feel that. Been playing since release almost daily and it sucks up a lot of my free time lol. My main frustration with it right now is that RNG absolutely refuses to let me own Mona, I want her so bad but the game is like "No, you want the husbandos. Take 2 Diluc and a Childe. Enjoy."

I tried adding yours but I got the same error. I'm guessing we might be in different servers, judging from I looked up online. I'm in the American one, and they can't interact with each other for whatever reason.

sockerdricka Mar 16, 2021 10:16 AM
My Laws to Watching Anime
✮ Never drop an anime no matter how terrible it is.
✮ Enjoyment takes priority over everything else.

Those two laws don't seem to mix well.
For your own sanity I'd urge you to consider dropping any shows you start that turn out awful.

Also, did you complete VA-11 HALL-A? What's your take on it?
I played it for a while (maybe about 1/3 through? not sure) but kind of stalled atm. Planning to play it through "later™"

save and rehost
or just use the image link

congrats on achieving those points~
(if you have other rewards requested and pending, give us time to get there)