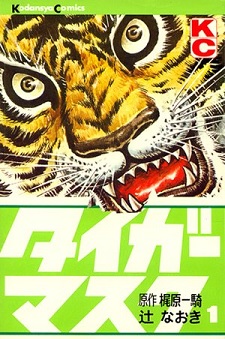 New Japan Pro-Wrestling (NJPW) announced today that a new installment of the Tiger Mask wrestling anime is in production. In addition to a domestic broadcast, the series will also be streamed globally. The announcement was made by Takaaki Kidani, the president of NJPW's parent company Bushiroad.

Tiger Mask was created by Ikki Kajiwara and drawn as a manga series by Naoki Tsuji between 1968 and 1971. The original TV anime adaptation aired between 1969 and 1971, and it was revived in 1981 as a series titled Tiger Mask Nisei.

The Tiger Mask manga follows Naoto Date, a professional wrestler who returns to Japan from the United States. His return is prompted by a desire for children to not idolize him as a "villain" wrestler, but as a "heroic" one. The series also featured contemporary wrestlers such as Antonio Inoki and Shouhei "Giant" Baba.

NJPW is the world's second largest wrestling promotion in terms of attendance and revenue, behind the American World Wrestling Entertainment (WWE).

Time to make it rain on MAL.

Great news if only for the fact that they'll be guest appearance by wrestlers on the njpw roster.

I already tried to add Okada's guest character appearance in 2 other anime before, i better not be denied a 3rd time if he makes a guest appearance in this when i try to add said character to the database.

I remember that Tiger Mask (probably the second season?) aired on TV when I was a child and back then I didn't really like it. No actually I was scared of it XD

I've wanted to watch the original for so long, but the lack of subs meant it was a no go.

Yep, I hope this continues.

I trying to remember if this was ever shown in the US.

It will look worse and have worse animation than the old version, I 100% guarantee it (except if it's by madhouse).

Words can't even express how hype I am for this series!!!!!!! Ever since I finish Ashita No Joe, I always wanted to see Tiger Mask, but I could never do that since the original series isn't sub. I hope the new Tiger Mask is remake of the original 1969 anime series.

ohhh I remember watching this anime (dubbed) when I was a kid :)

Bishonen Ibushi incoming!
My panties can only get so wet.

Oh yes. I was just telling my girlfriend the other day how much I wish there was a pro-wrestling anime, because that is a sports entertainment anime I could actually get into.

I am so hyped.

Paulo27 said:
Let me guess... Tatsunoko Production will do this.
or Toei, what with fucking abarenbou matsutarou

Paulo27 said:
Let me guess... Tatsunoko Production will do this.
the save bet probably toei, since they are the one that do previous adaptation. also they are also already with body figthing shows.

Holy shit. Tiger Mask is one of if not the earliest anime that I could remember. Excited as hell.

I have the same reaction as you when I heard this :)

I remember I was watching a youtube video about the history of animation / sakuga and I came across this amazing wrestling animation from Tiger Mask. Never watch the original series though.
So, It would be great if we get more amazing animation like that in the new series.

Awww yeah.
Now if somebody would translate the original series, that would be even more awesome.

I don't think so...I think there's gonna be a lot of cool spots for contemporary Japanese wrestlers and it's gonna be mostly for kids/wrestling nerds.

MAYBE KENNY OMEGA GETS TO BE IN THIS!? HE SPEAKS JAPANESE AND HE'S P FAMOUS.

That would be so awesome lol

Aaaaaaand it was awful. So a no-go for me.

Wow, finally something without moe (I hope)!

I don't think so...I think there's gonna be a lot of cool spots for contemporary Japanese wrestlers and it's gonna be mostly for kids/wrestling nerds.

MAYBE KENNY OMEGA GETS TO BE IN THIS!? HE SPEAKS JAPANESE AND HE'S P FAMOUS.

Aw man I wanted a modern take on it lol.

Lol, yeah I'd be with you if it wasn't actually sponsored by NJPW

Holy shit. Tiger Mask is one of if not the earliest anime that I could remember. Excited as hell.