Toei Animation has announced at AnimeJapan 2016 that it will produce the previously announced new anime adaptation of the Tiger Mask wrestling manga.

The new adaptation is a television series, tentatively titled Tiger Mask W, that will continue the story of the original work. Its production commemorates the 60th anniversary of the Toei Animation's formation and will utilize both 2D and 3D animation. The studio previously produced the 1969 anime adaptation and its 1981 sequel.

Synopsis
Two young wrestlers face each other in a recently revived underground wrestling organization, the Tiger's Lair, which destroyed the wrestling dojo they grew up in. One took over the training facilities of Naoto Date at the foot of Mount Fuji, as well as the mask he left behind. The other dared to enter the Tiger's Lair and won a fierce competition, receiving a jet-black tiger mask. One tiger walks the path of light, while the other walks the path of shadows. Neither one knows the other's face. On the ring, they are natural enemies, but they have the same purpose—destroy the Tiger's Lair! 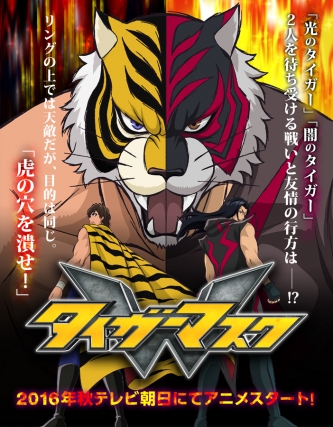 what are you talking? Tiger Mask is a mega popular anime of the end of the 60s and 80s and the property has been bought by Toei since the beginning.

What do you mean "honor of manga"?

Unless Toei didn't wanted to do the property no more, any anime production will always be done by them.

But I won't be watching it, since previous anime is still unsubbed.

I know,they made this because of the honor of mangá,which means its just toei,i just disapointed.

Tiger Mask is a Toei property since 1969!

So, I need to watch previous part before going to watch this one.

Yay for another thing toei can ruin.
Hyped af!!

Why Toei,Didnt they have other better studio?

Toei
That's all I need to know these days.

I always end up liking Toei stuff, even though I can't deny their shittiness. Also really enjoyed Matsutarou...
Well, I like sports and wresting, so I am looking forward to it. But I doubt I'll watch the prequels.

Mmh if it's not necessary to have watched the original serie i will try it. I'm always in for a good sport anime, and i hope this one will be entertaining at least.

That's a lot to catch up to if I wanna watch the new series. Also Toei...

they better cure up rapapa the hell out of that shit cos if that turns out to be another abarenbou matsutarou, i will bomb Toei

I knew it would be Toei! Given that is for their 60th years I hope that they release it still this year.

Sounds cool. I might check the previous adaptations. Looking forward to the new work.

arsonal said:
Its production commemorates the 60th anniversary of the Toei Animation's formation and will utilize both 2D and 3D animation.
I love Toei, but the 3D animation part really worries me.

Do I have to watch the prequels then?