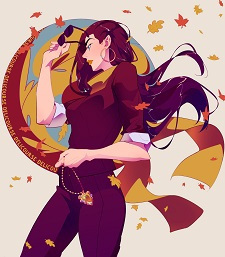 Yo, there's a Hyouge Mono server on discord if you wanna join. Since the manga is being translated regularly there should be lots of people who read it now. whether you like to discuss the anime or discuss the new chapters or the manga as whole, the server can be good place for any of that.
https://discord.gg/B6ATSRZ

that's good news. hopefully subete ga f ni naru holds up to be good throughout all the way.

whoa holy shit. i can't imagine that at all, lol. new chars is kind of expected. it is a franchise after all. same for gundam and precure. diff charas are to be expected.

Ah, I see. That certainly is quite the difference.

Toarujisuru Oct 6, 2015 2:25 PM
if it's only bad point is that it's too short, it can't be too bad. yeah, it definitely seems reminiscent of yami shibai's artstyle. does it have jump scares tho? that's what kept me away from finishing yami shibai. i like horror, but not if it's trying to scare me. only if it's trying to tell a scary story. that's why i prefer horror in manga than in anime

How long are the original episodes? And how long is each episode now?

Toarujisuru Oct 1, 2015 9:04 PM
Split cours are more common these days. It's less risky that way. Seems like you've got a light load this upcoming season.

If you put it that way, yeah, I would agree it is too much. I like watching characters who struggle. Jack Black sounds so incredibly good at what he does. The prequel will probably shed some light as to how he got so good.

I'll only be watching sequels like Gochuumon Usagi S2, Yuru Yuri S3, and Haikyuu S2. I'm debating watching Haikyuu weekly or once it's all completed. I also have an interest in Subete ga F since the chara designs are done by Inio Asano. Sakurako-san no Ashimoto looks like it could be interesting too. Don't know if I'll get to 'em or not. Does anything next season catch your eye? You looking forward to the Young Black Jack?

Ooh in French. It's fate, lol. And actually the character designer is a woman. :P

Toarujisuru Sep 25, 2015 9:33 PM
That sucks. It's a shame to be so closed minded, but it's okay. I feel more sorry for 'em not being able to understand than anything. There's so much variety. I'm sure there's an anime out there for everyone. If only they gave it a chance.

I don't even know what Moe is anymore at this point. Uh, it's cute yeah? If that's what you mean? It has it's own unique art style. The chara designs are made by Aoki Ume who is the same design behind Madoka Magica's characters, btw. Try out at least one episode. Do it for me. 8) Toarujisuru Sep 23, 2015 8:10 AM
Haha, it depends on the series. Like he had already watched Kaiji but he offered to re-watch it with me to see if I'd like it. Sure enough, I liked it so much I asked him if I could continue it without him and it became one of my all time favorites. He's pretty understanding. ^^ That time was different tho. He had already seen it. We're both new to Monster. So I wanna keep our reactions fresh.

Yeah, it's not often seen or talked about. I found out about it some years ago, because I saw the characters in an AMV. And they only popped up for like 2 seconds, but I'm so glad I found out. It's cute girls doing cute things slice of life, so if that's not your cup of tea you may be bored by it. I love it, though. It's genuinely relaxing and funny. The fact that the girls are art students and the SHAFT production studio gave this sort of artsy aesthetic to the show makes it a unique watch in comparison to other SOL anime. For example, in some scenes instead of animating a person walking, you'll hear the footsteps and you'll see footprints slowly showing up on a blank canvas. Often times I'd watch an episode and realize it's already over before I knew it. The music is so soothing too. Like this.

When you say this season, you mean the one coming up fall, right?

Toarujisuru Sep 20, 2015 2:57 PM
Yeah, we watch anime together. So far we've watched Steins;Gate, Golgo 13 OVA 1 + 2, and a bit of Hunter x Hunter 2011. After Monster, we're prob gonna' watch Hokuto no Ken, lol. BARA Anyways, back then I told him to look at my plan to watch list and pick something. He chose Monster. He told me I could read it ahead of the series, but that would ruin the excitement when watching it with him so I chose not to do so. When I visit him we don't just watch Monster. We play video games too. Monster only takes up a small portion of our time together when we hang out. So that can make 74 episodes hard to get through when i only watch about 2~4 eps per visit. That's what I meant. Sometimes he'll feel like playing games more than watching.

Rude? No way. I didn't get that feeling at all. Don't worry.

It was Hidamari Sketch Honeycomb. A Fourth season. Third season got announced shortly after I finished the second one, but I never would've imagined it would get another season. I swear. I'm not lying when I say I was running around my house yelling.

Toarujisuru Sep 19, 2015 6:31 PM
I've been watching Monster for months now because I've been watching it with a friend. I try to visit him once every week or other week, but it's still quite a bit to go through. There were several times where I wanted to keep on, but he wasn't willing.

I know the way you feel. A lot of the excitement can fade away the more and more series you've seen that don't measure up. I can still vividly remember when I actually got excited about an anime adaptation being green-lit. It's been a couple of years.

Toarujisuru Sep 18, 2015 7:47 PM
The Count certainly is a man of great charisma and power. Truly some features a man should aim to become. Gotta' love that feeling you get when watching one of your favorites. :] The art style is what I praise the most.

Toarujisuru Sep 17, 2015 8:02 PM
Finally finished Gankutsuou. What an interesting take on Paris. The animation was beautiful and unique. The sci fi element mixed really nicely with it. Having never seen the Count of Monte Christo all this was new to me too. It was pretty good the whole way through, but I was more interested in the core of the series (episodes 7~17) than I was with the beginning and ending.

Toarujisuru Aug 18, 2015 5:39 PM
Getting pretty impulsive too, huh? Haha. I've been the same lately. I told myself I'd read manga today but I spent the early part of the day playing animal crossing and now i feel like watching a thriller so I'll get to watchin' Gankutsuou.

I feel you. Enjoying it at it's best is the superior way to go. Does that mean you'll watch it with French subs? If not, I hope ya like it. Uchuu Kyoudai is prob the only anime I rated a 10/10 while it was airing. It's quite special.
All Comments