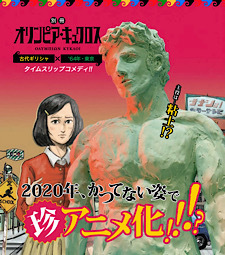 Synopsis
Demetrios, a timid and kind vase painter in Ancient Greece who dislikes sports and competitions, is one day forced to come up with a game to compete with the mayor of the neighboring town in order to save his village. While hiding inside a large vase outside his workshop, lightning strikes the vase Demetrios is in, transferring him to Tokyo, Japan, during the 1964 Summer Olympics (Source: MU).

Olympia Kyklos is Ryou Fujii's anime directorial debut. Fujii is a content creator who has worked on commercials, dramas, and children's programs including E-Tele's character Mittsu Kaaru-kun. He is known for his unique sense of silliness.

The series will be a mixed-media project combining clay animation with traditional animation and other video techniques. The manga's creator Yamazaki said in a comment, "The characters match the material so well that I think I created Demetrios in order to have Fujii make him into clay and animate him. I want to show it to the ancient Greeks, too."

This is sekkou boys all over again except it's not about an idol group but a bust that is still with a human girl!

I saw Thermae Romae and thought it was funny enough. I'm welcome to seeing another story in the same vein.

Judging from the synopsis it just looks like Thermae Romae but instead of bathhouses it's the Olympics, I'm pretty alright with this though as Thermae Romae was great

When I saw the picture I thought for sure that we were getting a second season of Sekkou Boys. Looks interesting either way.

Looking forward to it