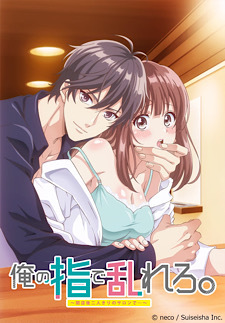 ComicFesta announced on Sunday that neco's teen love manga Ore no Yubi de Midarero. Heitengo no Saron, Ijiwaru ni Jirasarete (Crazy Over His Fingers. After the Salon Closes, He Cruelly Makes Me Impatient) will receive an anime adaptation in April 2020. The production is titled Ore no Yubi de Midarero. Heitengo Futarikiri no Salon de... (Crazy Over His Fingers. The Two of Us Alone After the Salon Closes...). Cast members, staff, and a key visual (pictured right) were also unveiled.

Synopsis
Fumi works as an assistant at a popular salon in the city and is aiming to become a hairdresser. She receives strict guidance from Sousuke, the salon's charismatic hairdresser and manager. Every time he touches Fumi, she becomes agitated. One day after the salon closed, Fumi stands in as Sousuke's practice partner at the shampoo station. As he touches her and sprinkles her with water, she becomes angry again! Or so the thought...could she actually be attracted to him? Sousuke flashes an evil smile as he senses Fumi's heart, and his fingertips start to stroke every corner of her body...Fumi cannot refuse his fingers anymore.

Sanji what the fuck happened to you?

DJ Khaled voice in my head: Another one

Honestly though, the saturation of these shows fascinates me so much. Makes me wanna write a long research paper on em, but then I remember I'm too lazy.

The database link for neco has been updated, thanks @Shadow-Chan for pointing that out!


024 said:
This looks shoujo asf
Because it adapts a TL (Teens Love) manga, an erotica for women. TL is another subgenre of more explicit shoujo/josei romances by analogy to Boys Love. Most of TL authors are also the same women who write BL.

The legendary studio that brought us Legend of the Galactic Heroes and Skirt no Naka. This one looks decent because the girl is cute. The existence of these pseudo-porn TV anime is hilarious.

Josei Hent@i FTW
In all seriousness, these have censored versions which helps them qualify as a normal anime. I remember Noble freaking out about this so much and saying it wasn't an anime, but then I see them defending That Controversial Anime That Shall Not be Named. Hypocrisy of anime community at its finest

Piromysl said:
Last one was probably the best of those. This one also looks decent.

Nah. The best one was about a girl who fell through cellar on a guys dick. Though, the last obne was also decent.

And I laugheta bit that they hired 3 megane seiyuu for it.

Last one was probably the best of those. This one also looks decent.

Another one of these, God bless. keep'em coming..