Manhwa 'Tower of God' Gets TV Anime in Spring 2020 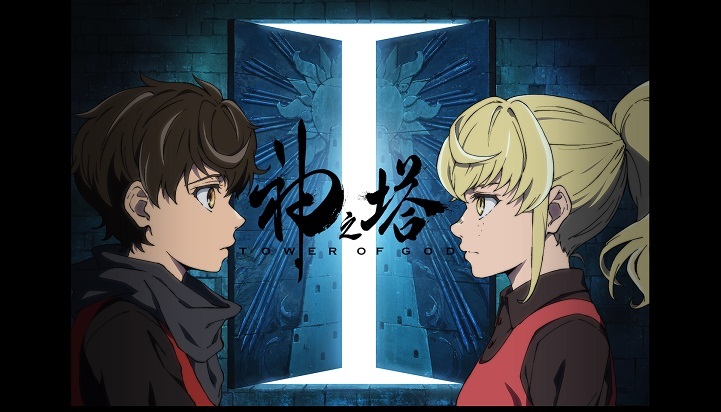 Line Corporation announced a television anime adaptation of SIU's Tower of God manhwa on Friday. The anime series will begin airing in April 2020 under the title Kami no Tou: Tower of God. An official website also opened, revealing a teaser visual (pictured above).

Synopsis
Tower of God centers around a boy called Twenty-Fifth Bam, who has spent most of his life trapped beneath a vast and mysterious Tower, with only his close friend, Rachel, to keep him company. When Rachel enters the Tower, Bam manages to open the door into it as well, and faces challenges at each floor of this tower as he tries to find his closest companion. (Source: Wikipedia)

SIU launched the adventure fantasy manhwa in Naver Webtoon (now Line Webtoon) webcomic portal in July 2010. Naver began releasing the chapters in English in June 2014 and in Japanese last year. Tower of God has been translated into 28 languages and garnered over 4.5 billion views worldwide.

Im very excited i have heard nothing but good things about the manga, idk if i should wait to read it or read it before the anime comes out

Good news, looking forward to it... hope it's succeed so we can have more manhwa adaptation, im here waiting for Solo Leveling....

i wished that the anime was made by the koreans since i got sick of all the japanase f.ups over the years and since this isnt japanese author i think the anime will get screwd in more then one way because of that fact
i hope to be wrong since i am a big fan of SIU artwork and dont want the anime to be a failure

embarrassing you guys still use manhwa to this day. lol.

Im very excited about this. hope a staff dont screw up. love the manga

This manwha is the best long running manwha, although it's not perfect, it definitely has the potential to compete with the ultra popular long running japanese shounens out there.

This really feels like a do or die situation for the manwha animation world though, if TOG anime is well made (which we have no way to know, people went crazy way too quickly without reading or researching the studio) it will basically mean the next few years will be filled with all the other popular manwhas, who also happen to not be particularly worse than the popular stuff from Japan.
Solo Leveling would almost certainly be a big success as well if animated, for example.

But if we get a shitty adaptation after what Noblesse got in the past... it might sound like a "manwha is a big no" in the heads of the big japanese animations studios.

Basically let's just hope the adaptation does TOG justice, part 1 in particular was amazing, and the later parts have everything they need to be successful, so its all on the animation.
At least the picture they showed looks fine by me, but curious as to why there is no preview when its supposed to come out in like a month or two?

now that i think about it TOG is very similar to made in abyss, like VERY similar.

they even have the same thing as they go up the tower, the higher you go the more pressure there is on your body so only strong people can go to the top without their bodies being destroyed. and there are people who already made it to the top so far called "rankers"
rankers can be seen as basic white whistles.

also unlike in regular shounen like naruto/bleach/mha a lot more people die, correct me if im wrong but im pretty sure quite of few of the main cast and side characters have died.
and i like that death is permanent, there isn't any method of revival to cheapen death, or at least not at the moment

ysphyr said:
Daniel_Naumov said:
Whoever is picking this up is betraying the spirit of Japanese animation. This, and Chingnese cartoons, do not belong here.

ysphyr said:
Can we not have a child as a MC once in while? Just wondering...
It existed before you became a woman (if cannot know still no pics).


"And the villain still pursues her"

Following your conditional statement - there'll be no pics as the main condition isn't met.

Neostorm-X said:
ysphyr said:
Can we not have a child as a MC once in while? Just wondering...

actually tower of god is a coming of age story technically, its possibly as long as one piece, no sign of ending,

and the latest chapters bam is a teenager now, also people in the tower are usually hundreds of years old so i doubt the protagonist is a child

Hmm, I thought it'll be something like Satsuriku no Tenshi, but I guess it's not? It's a good thing then.

Well, even if he's de-facto an old fart, I doubt he'll act mature. Correct me if I'm wrong.

well no one knows how old baam is not even himself, as he himself is an amnesiac in a sense,
and he lived with his friend rachel his whole life in some kind of hole. without any information. for all we know in the story baam could be hundreds of years old.

but i do get that he acts like a child for the first few arcs as he literally has no concept of basic things like money etc
also i think there were a few time skips and stuff,

and the series also progressively gets darker and darker just like hunter x hunter.
actually come to think about it, you can call it a reverse made in abyss,
actually since tog came first you can say made in abyss is a reverse tower of god,

Why can't you check the information first and then carry all kinds of crap? Rialto Entertainment is a newly established company in 2018, they didn't do berserk, they don't even an anime studio. Below is the information that I took from reddit because that person explained everything very well. Read it carefully and do not spread the wrong information:
"Firstly, Rialto didn't produce the animation for Berserk. It was Gemba and Millpensee.Secondly, it's kind of vague from the english sources as to whether Rialto are even involved in CG production, or are just involved in funding/planning of it. There's a MAL and an ANN article about them, and from the MAL article (and a quick glance at his credits pages), the president of Rialto (Eiichi Kamagata) has historically worked on planning and funding animation. And in his recent years he's been at Lucent Pictures, one of the companies that helped to fund some CG productions such as the Berserk films and TV series. Most of the people going on about Rialto having worked on the Berserk 2016 TV series are jumping on people who were jumping on seeing Berserk being listed under their "works" on their website, and didn't care enough to even check the name of the studios that worked on Berserk. But given that Rialto was established after Berserk 2016 was made, I dunno what that means or how they would've been involved. Whether it could mean that Aniplex simply owns Lucent Pictures now or if they always did and just rebranded the company name."

I've never read this work, but my Twitter feed seems to love it.

Prog_upworks13 said:
Paul said:
Is this the team that decided to turn Berserk into what it is today?

no, its said on op post this producer is still a new one.

edit: lol you are right . This make me worried

TsukuyomiREKT said:
Lol, typical MAL. People see the word "CG" and immediately assume that the show is trash and "ruined", even when all we have to go off of is ONE promo image.

No PV after annoucement, not even char designs, even if is airing in just very few months away, is sorta a red flag.

Also, only full CGI anime I saw who was not ugly was Houseki no Kuni. The rest was just bad.

Oh, and Sidonia no Kishi (was actually kinda weird, but the weirdness style kinda was compatible with the plot of hard sci-fi and aylmaos).

I have been waiting for the ToG anime but I wasn't expecting it to come too soon. I can't say I'm very excited. I would prefer waiting for a few years to see a decent anime adaptation but it seems like they're rushing things.

ToG is a great manhwa and in right hands, its anime can be a masterpiece. But this news worry me...

ysphyr said:
Hmm, I thought it'll be something like Satsuriku no Tenshi, but I guess it's not? It's a good thing then.

Well, even if he's de-facto an old fart, I doubt he'll act mature. Correct me if I'm wrong.

You're wrong, Baam is way more mature than a lot of MC.

I really hope they don’t screw the adaption for Tower if God. it’s really goooood

ysphyr said:
Can we not have a child as a MC once in while? Just wondering...

nobody knows his age but he's definitely older than you