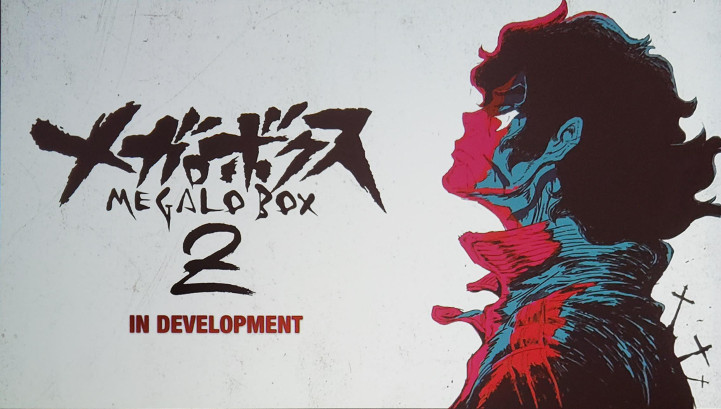 During their panel at Anime NYC 2019 on Saturday, TMS Entertainment announced that the original boxing series Megalo Box (MEGALOBOX) has a second season in development. The story will be set seven years after the first season. 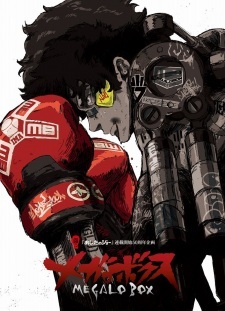 "To be quiet and do as you're told, that's the cowardly choice." These are the words of Junk Dog, an underground fighter of Megalo Box, an evolution of boxing that utilizes mechanical limbs known as Gear to enhance the speed and power of its users. Despite the young man's brimming potential as a boxer, the illegal nature of his participation forces him to make a living off of throwing matches as dictated by his boss Gansaku Nanbu. However, this all changes when the Megalo Box champion Yuuri enters his shabby ring under the guise of just another challenger. Taken out in a single round, Junk Dog is left with a challenge: "If you're serious about fighting me again, then fight your way up to me and my ring."

Filled with overwhelming excitement and backed by the criminal syndicate responsible for his thrown matches, Junk Dog enters Megalonia: a world-spanning tournament that will decide the strongest Megalo Boxer of them all. Having no name of his own, he takes on the moniker of "Joe" as he begins his climb from the very bottom of the ranked list of fighters. With only three months left to qualify, Joe must face off against opponents the likes of which he has never fought in order to meet the challenge of his rival. [Written by MAL Rewrite]

Megalo Box is based on an original draft by Ikki Kajiwara and Tetsuya Chiba, and it commemorates the 50th anniversary of the Ashita no Joe franchise. The anime marked You Moriyama's directorial debut. Katsuhiko Manabe and Kensaku Kojima handled the series composition, while mabanua (Sakamichi no Apollon) worked on the music.

The 13-episode TV anime aired in Spring 2018. The Blu-ray volumes included three short episodes, with the first serving as a prologue to episode one. Crunchyroll streamed the anime on its platform while it was airing.

Viz released the series as a complete collection in June, which included a standard DVD, Blu-ray, and a limited edition Blu-ray.

Just binged season 1 and I enjoyed it. Season 2 should be good as well.

I wasn't expecting this at all, I don't recall the first show being a hit. But whatever, I'll watch.

Man I cant wait for this, I need it now

This second season is going to be interesting.

Ayy someone needs to knock on my door once season 2 has finished airing so I can straight binge watch 2 season altogether.

Interesting. I guess the overseas appeal had its way with this. But the one thing I wonder is if they will render this show above 240p this time and save us the eye cancer?

The 4th character in the trailer looks kinda like Sachio. Perhaps they aren't new characters but the kids all grown up?

thats a possibility too we will see

The 4th character in the trailer looks kinda like Sachio. Perhaps they aren't new characters but the kids all grown up?


jal90 said:
...really? This wasn't popular in Japan, it didn't do well in sales

If the music is as good as the 1st season, I'll be down to watching it.

Oh, that's nice. I very much enjoyed the first season, although I am curious what this second season will be about since the ending for the first one was pretty conclusive imo.

...really? This wasn't popular in Japan, it didn't do well in sales, and the story of the first season was conclusive. I don't know how should I feel about this, they will totally need a new MC and a new conflict for this to work, so this is basically going to be another story using Megalo Boxing as the context. Can't say I'm very excited about this one so far.


Hmmmm, In the PV i think we see Sachio as a young man and Joe with a beard. Perhaps it could be about training Sachio? Just some speculation

Nice to see good original stuff getting sequels. (I was happy about Zombieland Saga as well.) With all the adaptions where the source material is endless ... where often only the bad stuff gets more than 1 season ... these original works are refereshing to watch in combination with some shorter manga that get fully adapted within 2-cour at max.

Not really in the mood anymore for any stuff where the manga runs sooo long that it would need more than 2-cour to fully adapt. (With the exception of stuff that I have watched the first seasons and want to watch it completely like Shingeki or Souma ... and some new stuff like Vinland Saga which is unique - you don't have viking setting that often. But a big no to the fantasy isekai endless stuff.)

Omg finally some good news! I was scared over the lack of good anime coming out. I'm super hyped for this.

Lelouchwakams said:
why this instead of joe no ashita?

filtyh gaijin and their alien taste
Why? Ashita no Joe was adapted completely.

I legit screamed, yeeeeeesssss the first season was so freaaking goooood