'Violet Evergarden' Receives Side Story Ahead of Anime Film 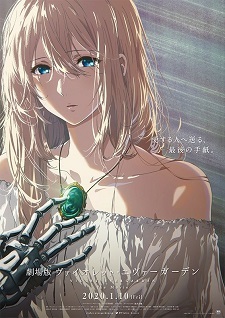 The official website of the Violet Evergarden anime film revealed a key visual (pictured) on Friday. Kyoto Animation posted a teaser trailer for the film, which will open in theaters in Japan on January 10, 2020.

Her name is Violet Evergarden, and she works with letters. It has been years since the war has ended and left people with very, very deep wounds. The world returns to a more peaceful state gradually, and new technology is being developed and guides people into the future. Violet Evergarden keeps thinking of the person who means the most to her while she tries her best to live a life in this world without him. One day, she finds a letter... (Source: Manga.Tokyo)

The website also announced a new side story for the series titled Violet Evergarden Gaiden: Eien to Jidou Shuki Ningyou (Violet Evergarden Side Story: Eternity and the Auto Memories Doll). The side story will have a two-week limited screening in select theaters from September 6–19. Haruka Fujita, the series director for the television anime, is returning to helm the anime.

The anime film is planned for a simultaneous worldwide release. Taichi Ishidate will reprise his role as the director for the film. Lead staff members returning from the television anime include screenwriter Reiko Yoshida, character designer and chief animation director Akiko Takase, and music composer Evan Call.

The television anime adaptation of Kana Akatsuki and Akiko Takase's awarding-winning novel premiered in Winter 2018. Netflix streamed the series simultaneously in some territories, including Japan, the Philippines, the United Kingdom, Canada, and later, in the United States in April 2018. The fourth and final Blu-ray and DVD volume bundled a special episode in July 2018, which debuted on Netflix worldwide in October of the same year.

Pls dont let our 14 year old violet get married to a 30+ year old guy who confessed his love to violet when she was 10 years old.

Violet's so beautiful, as always <3

MightTheKidXD said:
Whats funny is that People just brush off the Fact that Gilbert just confessed to a 10 YEAR OLD VIOLET IN THE ANIME 😖

Lol thats why i hate people shipping them.
I interpreted their relationship as guardian/guarded personally. I'm pretty sure Gilbert doesn't wanna put his diddly in Violet's doodly, but I guess we'll see.


MightTheKidXD said:
Lol thats why i hate people shipping them.

Your hate gives me more energy! I wish there were more people like you!

Lol thats why i hate people shipping them.

As someone who have read the LN, I hope they won't bring Gilbert back

Hopefully this and by extension the film, aren't as frustratingly dumb as the TV anime.

maybe i'll get more enjoyment out of this than the anime, i at least know kyoani can turn even their most average anime into a good movie ,but even their visuals for the key art seem like a set up from an already amazingly beautiful show so heres hoping

no complaints here, I can't wait to cry even more

Wow that key visual is absolutely incredible. Violet looks so beautiful with her hair down like that. Maybe there's a chance we'll get Lux in this side story. Or if not then hopefully in the film since I've already been waiting to see her for like a year now.
In any case it's gonna be amazing if they manage to keep the quality of the show.

_MushiRock11_ said:
Boy, that’s some stunning key visual! Kyoto Animation are definitely set to provide us with another gorgeous show and I couldn’t be more pleased. Can’t wait to see this Movie!

you mean they will continue to butcher the novels?

Boy, that’s some stunning key visual! Kyoto Animation are definitely set to provide us with another gorgeous show and I couldn’t be more pleased. Can’t wait to see this Movie!