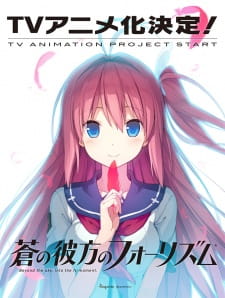 Ao no Kanata no Four Rhythm (Aokana), a TV anime adaptation of the adult visual novel of the same name, has been announced to air in Winter 2016. The cast will be announced at a later date.

The original PC game is developed by sprite, which also developed Koi to Senkyo to Chocolate. The latter was adapted into a TV anime in 2012. Aokana won the Grand Prize and User's Choice Award in the 2014 Moe Game Awards. A PlayStation Vita version is scheduled for release in 2016.

Synopsis
In a world where flying is as simple as riding a bicycle, there is a popular sport called "Flying Circus." The protagonist once had a bright future ahead of him in that field of sports, but due to an overwhelming defeat in addition to a certain other reason, he has left that field. However, he meets the transfer student Asuka Kurashina and regains his passion as he teaches her how to fly. With his situation changed, he participates once again in the Flying Circus. Just how high will he be able to fly this time with Asuka at his side? This is a love story about the two who met while soaring in the skies, and the friends surrounding them. (Source: VNDB)

I am definitely watching it for Asuka Kurashina :-P

Was waiting for the airing time. Can't wait for it <3

Koi to Senkyo to Chocolate was fun, hope this is as well. I'd like to avoid this being too 'forced' on the 'fateful meeting' sort of thing, and also making the girl too 'moe', otherwise I have no problem whatsoever I suppose.

I'm really worried about this because of Gonzo and their animation quality, plus they tend to stuff up adaptations that ave action or sci-fi elements in it (cough cough Gantz) unless it's SoL with some comedy (My Bride is a Mermaid, Sora ga Seiyuu) or something like NHK then I rather not have them do it. Luckily this time they have a very good script writer which gives me some hope for this, the director doesn't have any works that stand out so not to exited by that choice. Hope this surprises me and Gonzo actually put some money behind this.


THE MASKED PLAYER IS MINAMO

We though the exactly same thing for Lerche this season.

what? who is we and what are u talking about?

A lot of people were disappointed when they saw "Lerche" written in MonMusu's studios and Gakkou Gurashi's studios. They thought Lerche was going to ruin MonMusu's adaptation and GG's adaptation.
lol ppl were glad lerche got it cuz there was rumors of IMS

"The protagonist" kinda worries me a little though.

Kaioshin_Sama said:
They really love loading up Summer and Winter with these kinds of titles don't they? It doesn't surprise me much that this is where Gonzo is at at this point. They've lost the access to the more high profile stuff and their status of potentially producing originals.
Gonzo has always been incapable of producing consistently decent content even back in their mid 2000s heyday. I'd have been fine with them staying dead.

1. Love story that doesn't seem like a general harem.
2. Koi to Senkyo to Chocolate legacy. I rather enjoyed that anime.

The visual novel has some of the best artwork that has ever been in a moege.

And Gonzo is going to completely ruin that. Nice!

Cool, always wanted to read the VN but there hasn't been an official one and the fan one has barely any progress. Welp, sorta looking forward to it for now


THE MASKED PLAYER IS MINAMO

We though the exactly same thing for Lerche this season.
what? who is we and what are u talking about?

A lot of people were disappointed when they saw "Lerche" written in MonMusu's studios and Gakkou Gurashi's studios. They thought Lerche was going to ruin MonMusu's adaptation and GG's adaptation.

HawkEye6591 said:
> The original PC game is developed by sprite, which also developed Koi to Senkyo to Chocolate

That answers my question from a month ago on this anime's page.

I will watch it!