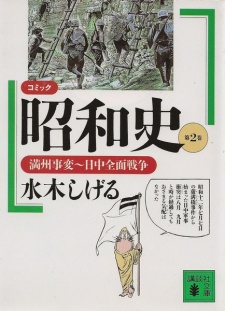 The nominees for the Asia category include
All You Need Is Kill by Takeshi Obata, Hiroshi Sakurazaka, Ryousuke Takeuchi, Yoshitoshi Abe
Master Keaton by Naoki Urasawa, Hokusei Katsushika, Takashi Nagasaki
One Punch-Man by ONE, Yusuke Murata
Ookami Kodomo no Ame to Yuki by Mamoru Hosoda
Shibou to Iu Na no Fuku wo Kite by Moyoco Anno

Shigeru Mizuki, known for GeGeGe Kitaro, wrote Comic Showa-Shi accounting his life experiences during the Showa period. The manga was originally published under Kodansha in Japan. It received the Kodansha Manga Award in the General category in 1989.

Publisher Drawn & Quarterly licensed the manga in 2013 for English release under the title Showa: A History of Japan. The first volume, titled Showa 1926-1939, was released in October 2013 and covered the militarization of Japan and the lead-up to the Second World War. The second volume, Showa 1939-1944, was released in May 2014 and recounts the final moments that ignited the Second World War, and how harsh life in Japan was during its militarized era. Showa 1944-1953, the third and final volume, was released in November 2014 and covered the final years of the Pacific War and the war's aftermath for Mizuki and the Japanese people.

The Will Eisner Comic Awards, or the Eisner Award, are achievements that recognize creativity in the American comic book industry. The award recognize greatness in several categories, including categories such as Best Writer/Artist, Best New Series, and Best Publication for Young Adults. Held at the San Diego Comic-Con International, the first awards took place in 1988.

I'd love to see some anime adaptations, haha. I can imagine great shorts.

Grusomhed said:
The Will Eisner Comic Awards, or the Eisner Award, are achievements that recognizes creativity in the American comic book industry.

Something is totally not okay in that sentence.

They're giving it the award because it probably had a good translation.

Unless you're talking about "industry". I dunno, I'm no comic book fan. My reading is restricted to Darkest Night, Alan Moore and Deadpool, that's the filthy casual that I am.

The Will Eisner Comic Awards, or the Eisner Award, are achievements that recognizes creativity in the American comic book industry.

Something is totally not okay in that sentence.

Well deserved. The rapid-fire Japanese-specific events might be a bit of an overload for those who aren't familiar with Japan of the time, but Shigeru pleasantly juxtaposes the thick history alongside his own personal story and quirky yokai commentator.

The information here is a little wrong though. Drawn & Quarterly aren't quite done yet, and are still putting together the fourth and final volume, Showa 1953-1989. It's due out this year.

I've heard nothing for praise for Mizuki's historical works, so I'm looking forward to reading them! All You Need Is Kill is a pretty darn good manga too, and it's nice to see more Moyoco Anno getting released here.

Aww One Punch Man should of won an award as well :O

Impressive. This one has won over some really popular titles. Now it needs a trilogy.

You have been proven wrong.
It just depends on the person, those that are corrupted just weren't that good to begin with.

Grats on the winner! I'm kinda eager to read that and GeGeGe Kitaro one of these days. Both sounds interesting for their premises.

This manga should be the very thing Abe reads because his actions are going to cause a repeat of some of the brutal and despicable events in Japanese history.

Never heard of it, but it's alongside a great list of nominees; I oughta check it out.