by tsubasalover
Oct 17, 2014 3:58 PM | 43 Comments
It was revealed on its official site that the novel Hibike! Euphonium: Kitauji Koukou Suisogaku-bu e Youkoso written by Ayano Takeda will be receiving a TV anime adaptation. More information will be available on December 28th.

The novels tell the story of the Kitauji Music club and its members. With the introduction of a new club adviser, the story depicts the students' daily lives as they face challenges and obstacles. 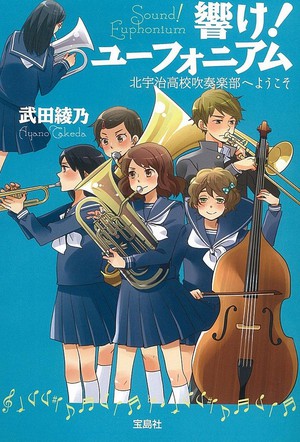 Looks good. It's probably gonna be dramatic but I hope they won't overdo it.

Anime about wind instruments, lol I'm so in

i'll check this out

Oh this is interesting.

I have mix feeling about this one

As expected, judging from the short story at least, the music theme is more important than in a certain light music club anime... And looks like with this anime, the red glasses frame trend will be continued further (which I sadly didn't notice when looking at the image of the website, but only when I was already reading the text OTL).

I could cry at the blandness of the premise. Good luck on the actual execution.

I am likin' it. Will watch.
Only one boy in the official website. He can either be gay, or a ladies man.

SnazzGary said:
What is up with these novels and having really boring school synopsis'? They all seem to star high school kids in clubs and whatnot.

I don't understand the appeal of such stories.
There's novels like that in every country. They're adapting that kind of novels in anime because it's easier to adapt, and because it will probably appeal more to anime fans than novels staring adults, for example. Look at baccano for example . Only adults. It sold crap. There are always exceptions, sure, but they probably consider that adapting a novel with only adults MC in it to be far more risky than one with teenagers MC.

BTW, I seriously laugh at all the "it's a novel, not a LN, so it's better" kind of posts above. You obviously have absolutely no idea about how blurry can be the difference between a LN and a novel in term of content. It just depends on the edition it's published in. And some titles actually are both LN and novels because they were published in both, as well.

It could be good, I hope it's one of those realistic and heart-warming series :)

A novel, not an LN? There's still hope.

Another one with a very long title xD
I'm always up for music/ SoL anime, I'm looking forward to checking out the PV. :-)

"Because we can't come up with a clever title, well just go ahead and describe what happens in the show"
I swear that's the naming process for each and every of those dumb titles <_<

anyway at least it's based on a proper novel...apparently.

Haine15 said:
SnazzGary said:
What is up with these novels and having really boring school synopsis'? They all seem to star high school kids in clubs and whatnot.

I don't understand the appeal of such stories.

Agreed , Most of the anime getting animated recently are about clubs with weird plot -_-

I think its because they ran out of good plots. So stay with the usual slice of life boring plots.

Probably "no, thank you" for me.