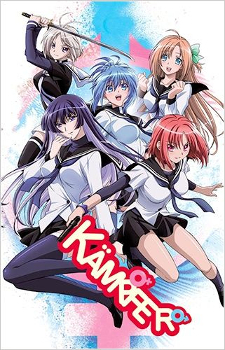 Sentai Filmworks announced the English dub cast of Nomad's gender bender anime Kämpfer through a promotional video on Thursday. Shannon Reed will serve as the ADR director. The company will release the series, in addition to the two-episode special and picture drama, on Blu-ray on May 28.

Kämpfer is based on the light novel written by Toshihiko Tsukiji and illustrated by Senmu. It began publishing in November 2006 and ended in March 2010 with 15 volumes. The 12-episode TV anime adaptation aired in Fall 2009, which Sentai Filmworks previously released the anime on DVD and Blu-ray in 2011 and 2015, respectively.

this was the first anime i watched online twice... oh boy was i ALL OVER this show

Offline
Apr 2014
4399
crazy how its been a decade and it still looks better than most highly regarded anime of today.

Offline
Feb 2014
7030
I don't think anyone was expecting to hear about this anime again this way.
#8
Stripes
not awake

Offline
Jul 2017
5655
Sentai has been picking up some trash tier anime to dub lately and I for the life of me cannot figure out why?
#9
DancingTheBa

Offline
Aug 2016
1019
From what I heard from the preview I actually like this dub a lot more than the original Japanese voices. Think this'll give me a good excuse to go and rewatch the series too, I'm surprisingly pretty hyped for this
#10
FlyingDunsparce
Soaring

Offline
Apr 2010
401
Who knows maybe the dub will attract enough attention to raise interest in a second season(I know unlikely but a person can dream right).
MysteryFan89May 3, 2019 8:50 AM
#13
thepath

One of my first anime is getting a dub.

The gender bender aspect should be interesting.

Recently good anime have been receiving good things so I am very happy.

Offline
Sep 2011
33435
Why are they even bothering? I mean I guess no harm but it's weird to see them bother picking up a very old and pretty poorly received series.
#16
Rabb2t

Offline
Nov 2016
94
I'm confused why they would pull a decade old show and give it an English dub now, but hey, one of my first animes gets some treatment. Maybe they'll actually finish the second season, who knows? Doubt it.
#17
HunLepto
Offline
Feb 2019
439
I'm ashamed of whoever made this decision. There are alot of other better shows that can get dubs, why they choose this dumpster fire.
#18
momosemomo

Offline
Jan 2018
1907
kind of shocking. Kampfer was one of the first (if not THE first) anime that I had so much hope for that let me down so much. I usually go at everything with a positive attitude, and this one had tons of potential, but just couldn't produce on it. Maybe a season 2 could have cleared that up. I can only hope a dub means possibly another season at some point, but I'm not gonna hold my breath...
#20
TheKing528
Offline
May 2018
158
HunLepto said:
I'm ashamed of whoever made this decision. There are alot of other better shows that can get dubs, why they choose this dumpster fire.

Exactly. This anime is trash not to mention it has one of, if not the stupidest and dense MC's of all time.

Imagine releasing a decade old series in dub, that isn't even considered a classic/popular by anime standards, when the same amount of effort and money could easily be spent into dubbing any 2018 series that was picked up by Sentai. Which, needless to say, would have sold better than this show's DVDs or whatever the fuck it is that Sentai is selling.

Offline
Feb 2019
241
Well that's really surprising...I mean the series is not that popular and they decided to release the dub TEN years later?
#25
_kuro_n3ko_
Offline
Apr 2017
68
this anime is a classic. im still hoping it gets a remake or a season 2 one day.
#26
Raymond_Bermea
Offline
Jul 2017
422
Man, the ending didn't make no sense. Can Natsuru just remain one gender which is a man and have a harem with Akane, Mikoto, and Shizuku? Have all his masculinity and be an Alpha Male. And he should go kill Kaede Sakura for being a snake ass dyke bitch.
#27
Skittles

Offline
Nov 2011
15
I got to attend the special screening of Ep.1-3 of the dub at Alamo Drafthouse La Centerra in Katy, TX, with Margret MacDonald, Katelyn Barr & Shannon Reed in attendance. The audience enjoyed it because the dub dialogue is really funny and the show is ridiculous. HIDIVE already has all the episodes + OVA streaming (including the new dub) since it's such an old show. I went ahead an binged it all this week and the 2 OVAs. Wow, the OVAs ratchet up the ecchi fanservice, too (not that I'm complaining).

Kämpfer was a fun romp, though putting it all on HIDIVE did potentially cost them a Blu-Ray sale from me.

Based on a LN, it's clear the anime only covers a small fraction of the original story. I enjoyed it but found it sometimes a little frustrating.

Polyamory and open, honest discussion could've fixed nearly all the rom-com conflicts....date Kaede as a girl half the time and date Akane as a boy because that's what each wants. Childhood friend loses because Fundamental Law of Anime, duh. Madame President reminds me of Hitagi Senjougahara, only if Senjougahara had made the first move instead of Araragi-kun.

The premise is interesting but under-developed and usually just played for cheap laughs. Vaguely reminds me of Ranma 1/2 but I haven't seen enough of that classic to make a fair comparison.

This isn't the first old show Sentai Filmworks has gone back to in order to dub; they did this for Maria+Holic as well.
See All Discussions