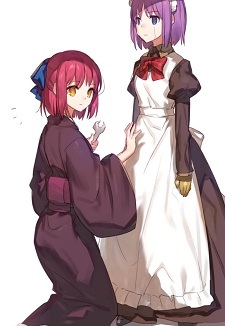 Congintive May 28, 6:15 PM
Oh, i thought everyone hated that ending including ur the 1st guy who liked that lol.

Btw, u got pdf for the detective is dead?

Also, your thoughts on aot ending?

AnonymousGuy9 Apr 15, 2:26 PM
Saikyou Degarashi Ouji is one of my favourite novels. I've been pushing the LN of that along with Magical Explorer to the translators I know of and in the Seven Seas monthly survey (though I don't think i'd like them licensing series that already have steady translations looking at what they've been doing to their own titles)

As for Shinwa Densetsu since it'll take time for the translator to reach the end of the series. I don't plan on reading it after the 1st vol cause binging it would be better.

I have loads of volumes left in my backlog but to look for new stuff I've started reading MTL of the WNs on syosetsu. There's a novel I'm reading currently that started off in 2012 but got an LN adaptation in November last year. It's called Ryuusa no Ori. It also has a manga adaptation that started recently. The story isn't rushed and the character developments are nice so check it out.

Thanks man. Memorizing Kanji is taking a lot of patience so I guess I'll take it slow and steady.

I don't think dracula is a reverse isekai. The vampires and hunters actually exist on earth but who knows Wagahara might make their origin from some isekai.
As for Segare even I thought it would continue. There wasn't any sort of concrete ending in the final volume. Though here's the final line from the afterword - 'To all the people who traveled along with me on this journey of Tokorozawa and Ante Lande, I hope I will see you again in a brand new story. Goodbye.'

The anime following the novel route would be great, but they'll have to adapt till the end. They can't just leave it hanging after announcing a sequel after all that time

Any good novels you reading now? I'm planning on speeding up my kanji learning given the scarcity of LN translations. There are many interesting novels releasing in Japan.

I'm waiting for it to be fully edited before reading but I need something to motivate myself with seeing that Yuusha no Segare got axed and you know the last two vols of Hatamaou. Both didn't have any satisfying ending.
I know Dracula will have Wagahara's realistic approach to fantasy but how much of it is similar to Hatamaou?

And yeah with Hatamaou s2 announcement I wonder if they'll go with an original ending. Seeing that the LN ended there's a really low chance of a complete adaptation

koingzell Mar 6, 2:34 AM
Yeah, it is sort of like that even though I discovered my favorites manga almost at the beginning. I think that there is too much similar thing in anime with similar theme and I cannot support stupid character or incoherent word anymore. I guess having less time available means that I am more critical of what I watch and there is less seinen than shonen in anime. It has been almost 3 years of slowing down (cf image) and now I mainly watch anime with friend, but only time will tell (at least, I may find later some germ that I haven't watched when I get back into it).

Sometime I ask myself a question I don't really care about the answer and try to find it. I guess it is just curiosity.

I agree same here, mostly mainstream too for people of my generation in engineering. Which is a shame because I am getting a bit burnout of mainstream anime lately or I have already read them in manga.

koingzell Mar 5, 8:18 AM
Hi, I am just writing a comment because of your message in the forum last year, saying that "30% affinity is an ideal match already".
We are at 28,7%, which is quite close, but not quite there o_0' (by the way, I am also working in mechanical engineering, coincidence? I think not!).

Syreid Feb 14, 4:19 AM
Yeah.
I finished the VN and plus disk>followed by Kagetsu Tohya.
Only melty remains I think? I heard there's a sequel before actress again so was hoping to read a manga for it if possible and then continue on with the AACC game.

Syreid Feb 13, 5:48 AM
Hey. Just wondering how do you get into the melty blood storyline?
I just got actress again only to realise its a sequel. I noticed there's a couple of mangas aswell, what's the best way to experience it?

Oh, I completely forgotten about that manga. I have read a few chapters and it's getting interesting, I might read some tomorrow since it's already night time rn. Yep, it's fine!

I put it On-hold after 21 chapters. I couldn't stop reading it because it was hilarious but kinda dumb at the same time. xD

I sent a friend request if that's ok with you. ^^