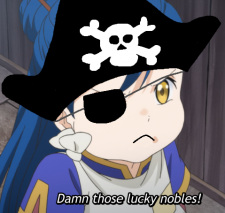 Exaccus Sep 24, 6:05 PM
Ah, that's right, I forgot that Eva was also technically one of Negi's students too. For a while there I only remembered her as his combat instructor. ^^; She was pretty badass. Rakan too.

Zazie was definitely a mysterious character for most the manga, from what I remember. Akamatsu had a plan in mind for her all along. The guy's a great storyteller and world-builder. I just wish he could have omitted the fan-service/ecchi antics in the earlier volumes. Fortunately, things started getting better once the school festival arc started.

Hah, I spoiled myself regarding who Negi ultimately ends up with when browsing a Negima/UQ Holder thread on /a/ awhile back. :p

Exaccus Sep 23, 5:00 PM
Yeah, the magical world arc is definitely one that I remember enjoying immensely. Though it's been such a long time since I read Negima that the plot details are foggy. From what I remember, out of all of Negi's students, Yue, Nodoka, Tatsumiya, and Kuu Fei were my favorites.

I vaguely recall there being an announcement while the manga serialization was in the midst of the magical world arc that the manga was only halfway over. But as we both know, Akamatsu was forced to rush to the ending not long after that. I tried reading a little bit of UQ Holder years ago but I couldn't get into it.

This conversation starting about favorite characters makes me realize that I haven't updated my favorites lists literally in YEARS lol.

Exaccus Sep 22, 9:01 PM
Thanks. I liked the way Akamastu wrote her character development, especially during the magical world arc. It's a shame though that Negima had to be ended abruptly.

NwAurion Sep 21, 1:19 PM
I don't think of it as particularly pretty, but i certainly won't disabuse you of that notion, so thanks ;)

rohan121 Aug 31, 5:53 PM
It should be by Aki99 from gelbaroo. Kunoichi Tsubaki character
Gelbaroo requires you enable the loli tag via settings though

ReSeinen Aug 7, 8:49 AM
I like all of the races of the first season over the other ones, although I think stages 2 and 4 are very good. Takumi is very cool, I like how he acts very calmly but gets things done. Now that you've finished the first season I highly recommend the Legend movies handled by LIDENFILMS, they did a great job with the animation, the downside to the trilogy is that they skip some parts of the anime (they skipped the Sayuki and Mako race which might be a dealbreaker because I like that race a lot) and it doesn't have Eurobeat, something integral to the series imo, it's so good! I hope they don't screw up MF Ghost which will be done by Felix Film, the same studio behind Aharen.

Liar Game has been very good so far, you can tell this is from the author of One Outs because every strategy blows my mind, like how Fukunaga was inside every team all along, although I did see the ending of the guy with glasses being part of Akiyama's plan from a mile away. All in all, great story so far. I hope Nao grows more independent from Akiyama because sometimes she's just too naive it's frustrating.

ReSeinen Aug 6, 5:34 PM
What did you think of Initial D? Are you going to continue it?

RAWKINOSWAG Jul 28, 12:19 PM
i def would love to see another sequel but the way it ended is very on brand for the author so i think its a wrap. if u havent already i recommend reading "mission-chan no daibouken" (not on mal database) same author but visually very different and tonally similar with heavier and more abstract themes.
All Comments