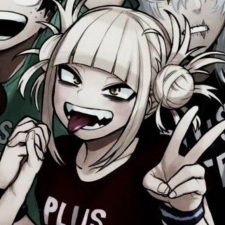 WanderingRonin Sep 15, 1:13 AM
Hi! Yeah, I started the original Gundam, I enjoy watching the classics and I thought it would be good to get into the Gundam franchise. I heard there are some really good Gundam anime series and it's worth to check some of them so I thought I would watch the whooole thing in recommended order for the story I found on the Internet somewhere.
In addition I'm a fan of sci-fi and mecha genre. I can't say it's a really good anime but it has its magic and good music.

SimplyKairi Sep 14, 9:26 AM
I kinda stopped caring about it in order to see it through

Accelerator15911 Sep 12, 1:38 PM
And i see that i figure they would make an anime of it at some time. Still looking forward to it

-Murasakii Sep 6, 5:07 AM
Hello there! Nice to meet you, Thanks for the accepting my Friend Request. 💖

WanderingRonin Aug 31, 1:57 AM
There is hd version avaiable here:

BUT, the voices are a rip-off from the cinema, you sometimes hear people talking or doing something. If you can't wait till the October, when the blue ray version releases, I don't recommend watching it because you can get pretty annoyed at times. I watched it because I was hyped as hell, 30minutes in I started to regret a little.

The_Shinjinator Aug 28, 12:29 PM
that reminds me, did you rewatch Naruto yet?

WanderingRonin Aug 27, 4:19 PM
The third one was really interesting, something new in the story. I didn't like how the characters react (Misato, Asuka, the ship crew) to Shinji and thus my lower ranking - I think it would be more resonable in their situation to explan everything calmly to him, even after all the pain. Anyway, the movie was lacking something the other movies had, I don't know how to say this haha, but I enjoyed it anyway

And I've just finished the last one... The first part was 11/10, the village arc, how time went by... amazing. Absolutely beautiful. Every frame could be put as a wallpaper or something. WONDERFUL. the second part of the story was amazing, but as Evangelion is famous for... it was difficult to get what was going on. But every character got their "redemption" in my eyes and at the ending scene with the live-action movie and Shinji and Mari running - I had tears in my eyes haha. The ending wasn't something epic or dramatical like the EoE was... but... it gave the closure and everything I needed to see.

The only thing I'm confused is... what the hell is the deal with Mari. Don't get me wrong, I really like her character and I could even say that I love to see her together with Shinji. BUT, If she was a colleagueof Shinji's mother, she is obviously older than him. Aaaand I assume that in the movie she weren't in love or anything. But in the "new" world at the end, I think everyone thinks they are together. And I would say they are BUT: What the hell was the DSS choker about? Did they have their memories from the story? I think I need to look that up on the Internet haha. I saw on the net that there is a parallel between Yui giving colours to Gendo's life and Mari giving colors to Shinji's life (the beach scene) BUT I still don't get the choker scene at the end :,)

Edit: I just woke up and thought about the movie the whole night. Soo, basically, this wasn't a timeskip but just a scene in this anti-universe where Shinji was talking to Gendo, that's why he has a choker- because it's a scene a SECONDS later without the EVA curse and his body regaining the appearance of 28years old, just like Asuka in the cocpit earlier. I don't know if this is correct haha

Quick edit: and I got what you meant by saying the rebuilds are connected to the original series. It's awesome they made it this way! Wouldn't like it any other way!