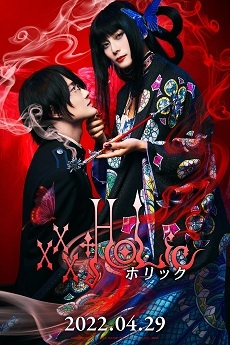 Film production and distribution company Asmik Ace announced a live-action film for CLAMP's xxxHOLiC manga on Tuesday. The film is scheduled to open in theaters in Japan on April 29, 2022.

The mystery supernatural manga ran periodically in Weekly Young Magazine from February 2003 to March 2010 before transferring to Bessatsu Shounen Magazine in June 2010 under the title xxxHolic: Rou and concluding in February 2011. Kodansha published the manga in 19 volumes between July 2003 and March 2011.

The xxxHOLiC: Rei (xxxHOLiC Rei) manga launched in Weekly Young Magazine in March 2013 and has been on hiatus since March 2017. The fourth and latest volume shipped in October 2016.

Production I.G produced xxxHOLiC Movie: Manatsu no Yoru no Yume (xxxHOLiC The Movie: A Midsummer Night's Dream) in August 2005. The first television anime aired in 24 episodes in Spring 2006, followed by a 13-episode second season in Spring 2008, and four original video anime episodes between February 2009 and March 2011.

A live-action television drama aired on WOWOW Prime for eight episodes from February to April in 2013 under the title CLAMP DramaHolic: xxxHOLiC. The drama series featured several differences from the original manga. A stage play adaptation ran from September 17–26 in Tokyo and October 1–3 in Kyoto.

Del Rey licensed the manga in English in January 2004 and published all 19 volumes between April 2004 and February 2012. Kodansha US relicensed the title in July 2013 and released the volumes in omnibus editions from March 2014 to September 2015. The fourth xxxHOLiC: Rei volume shipped in August 2017.

Synopsis
Living alone after his parents passed away, Kimihiro Watanuki is a high school student who can see otherworldly creatures that are attracted to him. His days are plagued by these nuisances, and he wishes to rid himself of this inconvenience. One fateful day, as Kimihiro is being chased by a horde of spirits, his feet bring him into a mysterious store to seek shelter. Here he meets Yuuko Ichihara, the mistress of this supposed store, who claims to be able to grant wishes. Yuuko offers to grant Kimihiro's, as long as he pays an appropriate price.

Thus begins Kimihiro's time working in her store to earn the payment necessary for his wish. In Yuuko's employ, he must become further involved with spirits and the supernatural before he can leave that world behind. How will he fare in the inexplicable encounters that await him? [Written by MAL Rewrite]

I'm intrigued, but wish I could season two of the anime

i dont normally watch liveactions but xxxholic is definitely an exception! i am so excited!

I guess I'm interested even if all live action is usually trash. Change my mind favorite!

Well, I sure wasn't expecting to see any news like THIS today... I ought to read more of xxxHOLiC really......

so, when the manga comeback? it has been hiatus for 5 years now.

The director is a noted stage director, and the props and costumes look very elegant and beautiful. So look wise it should be okay.

But xxxHolic will need to be fairly standalone, and mention the CLAMP verse as little as possible or avoid it entirely. Let's see if that can be managed.

Going to guess it's because Kamiki is also an occasional voice actor but that could just be a coincidence. No idea about the French one.

Watched the drama series years back and didn't think it was bad. Had great cast for the two leads as well. Kamiki/Shibasaki will be great too. They're good at what they do + the director is top class.

This is good I think

Not really a big fan of live action anime so this doesn't do anything for me, however congrats to all the fans of this series and the creator!! Hopefully it'll be a good adaptation

Actually looking forward to this live action. I make an exception for xxxHOLiC

024 said:
At least it's by the japanese themselves so it will stay in Japan.
Yeah, at least its not made by Netflix.

It's getting another live-action adaptation? And, it's a film this time! I should be happy, but I just know it will be bad. The cover already looks like it's only a cosplay. A good cosplay, but a cosplay all the same.

At least it's by the japanese themselves so it will stay in Japan.