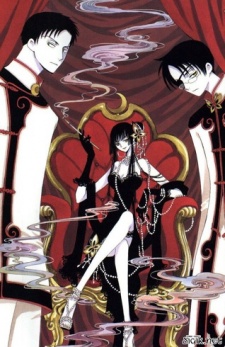 According to Mainichi News, CLAMP's manga "xxxHOLiC" was announced to get a TV drama adaptation. It will be aired on a satellite channel WOWOW in 2013. Anne and Sometani Shota will play Yuko and Watanuki, respectively.

almost ever anime is getting a drama

I love live actions and I love CLAMP mangas, but I'm not sure about it. But I will be wait for this only to see another adaption of holic.

My initial thought was OMG I can't wait!!! but then I was like...so how is this going to work out..¿ Guess I wait and see. But I'm impatient ahhhh

I'm really looking forward to this!

cottoncandy7 said:
Both the manga and Anne are meh tier, so no, thanks.

I'm pretty sure that xxxHolic has something going for it that's more than 'meh' since there are so many adaptations.

I am all over this.

Ehhhhh? Sounds cool, but how will some of the characters look? I loved the ones with big, wild, curly hair. I hope they don't change them completely.

I dunno about this Shota guy, but Anne, she's such an untalented actress, plus she doesn't have charisma for this role. Anyway, I have no intention to watch it.

I'll watch it as long as Yuuko's sexy.

aer0gam3r said:
I can't really imagine how this is gonna turn out...but I'll try it none the less.

So....how are they going to do Mokona? xD

I can't really imagine how this is gonna turn out.Anyway,can't wait.

Minene-sama said:
Maybe I'll watch the anime soon. I don't usually watch tv dramas but if its good then I might give it a try.
Onigiri_Otaku said:
Cool. has to start watching the anime now
Kitsu-nee said:
Wow, unexpected. I want to watch anime first though ;)

IMO the manga has better art style and plot execution. Graphic-wise, the characters are drawn like noodle in the anime (or also like Slenderman) which makes it looks unaesthetic to some people (If if you don't mind, go ahead though). Story-wise, I think the manga covers the whole story better because there's some parts which isn't animated in the anime.

Something to note at, xxxHOLiC happens in the same universe as Drug & Drop and Tsubasa Reservoir Chronicles, thus there are some crossovers in the manga (mainly with Tsubasa Reservoir Chronicles). It's actually advised to read Tsubasa first (btw the Tsubasa manga is WAY better and not chopped) or read those two at once, because there's a chapter near the end of xxxHOLiC which simply spoils the ending of Tsubasa, and there's a chapter near the end of Tsubasa which spoils xxxHolic.

Now back to xxxHOLiC.
Chronogically, the OVA goes between chapter 209 and 210 CMIIW, but in my opinion, the most enjoyable storyline would be:

OH MY GAWD! A MUST WATCH!

Don't know... I'm a little bit reluctant...
What really made xxxHolic special, in my opinion, was the way how they brought the story together with the music and the different drawing style.
Hopefully they'll manage to maintain that ambiance in the drama.

Both the manga and Anne are meh tier, so no, thanks.

Maybe I'll watch the anime soon. I don't usually watch tv dramas but if its good then I might give it a try.

Wow, unexpected. I want to watch anime first though ;)