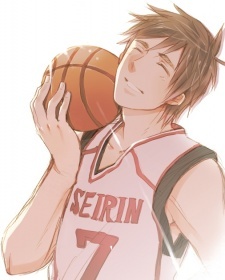 First of all, regarding the Best chara voting, the winner is Aomine Daiki.
So we had another special edition dedicated to him, one of the cards is still available and will be for the next 2-3 days at most.
So if you'd like to request, but already haven't, you can do it HERE.

Also, the February's character SE dedicated to Takao Kazunari is also going to stay opened for a couple of days.
You can request the cards HERE.

One more thing, since the First anniversary of the club was on March 10, though late, we still plan to celebrate it.

The March's character SE, this time dedicated to Kiyoshi Teppei, is most likely going to be opened during the next week.

And since the club is going to reach 3000 members soon, we're going to celebrate it by having a LE in April.
We're also going to have a new character SE soon after. (meaning for April)

So, in case you want to make sure you won't miss any of these events, we suggest you to keep your eyes on the club xD

Thank you very much for always supporting us!
Have a nice week :3


I'm a bit late with this newsletter delivery, sorry about that :P

Hey, everyone ^^
First of all, we'd like to wish you Happy Holidays, hope you spent them nicely and that this year is going to be better than the previous one for all of us ^^

We'd like to inform you there are few card editions which are currently opened, so if you're interested, go ahead and request ^^
Those editions are:
Christmas LE
Akashi Seijuro SE
Momoi Satsuki SE

Also, in order to make the club a bit more entertaining, we've decided to open a voting for your currently favourite Kurobasu characters.
You can vote HERE
There'll be more votings in the future, so if you find them interesting, make sure to keep the eye on the club :D

Btw, in case some of you haven't heard yet, the second season of the anime has finally been officially announced ^^
So, hope we'll be able to enjoy watching this series again soon :D

Thanks for always supporting the club!
Have a nice day :3

Hey, everyone :3
First of all, we'd like to wish everyone Happy Holidays, hope you have nice ones ^^
Also, since our club has more than 500 members now, we've made some cards in order to celebrate it :3
You can request them HERE.

And if you'd like to receive the club's newsletters in the future, you can apply HERE.
Thanks for supporting the club & have a nice day :3

Hey, everyone ^^
Just wanted to tell you that Midorima Shintarou SE is finally opened xD
Sorry for being so late this time (even though it's not a excuse, the so-called creator became too lazy so -.-).

Have fun requesting & have a nice day ^^

Hey, everyone ^^
We wanted to tell you the club has more than 2500 members now, so we've made some cards to celebrate it xD
You can request them HERE.
And we suggest to hurry up since some of them have a post limit xD

There are also few new discussion threads, so feel free to check them out xD

Thanks for supporting us all along ^^
Take care :3

Thanks for supporting the club!
Have a nice day :3

Welcome to new members, thanks to the older ones for staying with us <3

The Anime ended *sob* but we opened a LE as a Goodbye.
It's open for a month, so request away~

We also opened two new threads to discuss your favorite character and favorite team -> go here
and your favorite scene and episode -> go there.

In case you don't like to receive any more newsletters in the future
though there won't be many at all
you can leave a comment on my profile :)

Staff of Kurokocchi FC,
have a nice week <3

Hey, members :3
Since our club has more than 2000 members now, we've made some cards for you in order to celebrate it ^^
You can request them HERE.
Btw, some cards are limited to certain number of members, so hurry up if you'd like to get them xD

Also, the Kagami Taiga SE will be opened soon, so keep checking the club if you'd like to get some cards :3

Guess school will start soon for most of us (if it already hasn't), so we'd like to wish luck to everyone, hope you'll have a good working year ^^

Thanks for supporting us all along ^^
Have a nice day :3

Please save & rehost!
Don't hesitate to tell me if there are any problems.
The cards will be deleted in 3 days.
Thanks for requesting & have a nice day ^^

Hey, members :3
Just wanted to let you know that our club has almost 200 members, so thank you for supporting us ^^
We hope Teppei will get even more love in the future :3
Also, we've included the Official Member Cards, so you can request them HERE.

We don't think the newsletters will be so frequent, but can't tell for sure, so if you'd like to stop receiving it from now on, feel free to tell Heiwajima_Mayu.
Have a nice day :3

Sometimes I would check back my post in the forum but other times I forgot to. MAL has no feature to notify users if they are quoted, like in some forums. That's might be good to alert user for some feedback. :)

25 episodes seem short for sports anime. I hope the ending is not rushed or too hanging. Last time I read, the DVD sells in Japan is not that good. Any updates how KnB fares in Japan? I would wish a second season for this series, with the manga is still ongoing and such.

Lieila Aug 21, 2012 7:01 AM
Hi there. It's good to know someone also notices the drawings/illustrations changes in Kuroko no Basket ep 19. Also, you went through the earliest episodes too. ^^

wishbook said: "Most common mistake: pupils are too small while eye are too wide."

It's in episode 19 that majority of scenes and/or drawings that their eyes were like that so it's very noticeable. It pain me to look at my monitor screen, because so far from episode 1-18, of which the art has been consistent - all or almost all close up are good (since I think the main illustrator/s is incharge); I've noticed few shift in eyes when charas are far from focus / screen but I didn't mind them that much before. Anyway, I'm okay with episode 20 now. ^^
All Comments