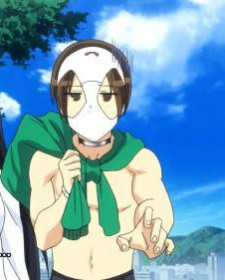 NOTE:
My scores are not a rating of quality independently or by comparison; but rather a reflection of how much i enjoyed it.
For further details feel free to read by lousy and pointless reviews.
I will accept most any friend request but I try to never send them.
It's to reduce my creepiness factor.
I believe in freedom of expression and abhor censorship in all it's forms.
I never know what to put in these things things because I'm boring and uninteresting. All I do is watch anime, read and pretend to be a beer sommelier. Well I do watch other TV shows and films outside of anime, but no ones interested in that. Despite all my free time, I couldn't be bothered to add any pictures or colors to this; I'm just lazy i guess.
I label myself a pervert because perverts are people who know the shape of their desires. They have carefully traced those contours like a blind man using both hands to measure the shape of a vase.
I label myself as goth because I have a tendency to constantly seek the darkness in people. I crave the cold delicate aspects of human beings, like murder and torture. People like us are occasionally called GOTH. People who like blood and guts are different from people who enjoy death cries. Though I don't "dress the part". I'm not one to accessorize.
Activities: I like to read books, heavy metal, manga, comics etc. I fancy myself a beer Cicerone & film critic. I like goin' to concerts big or small though it seems an extravagance these days. I enjoy listening to music like 99.9998% of the rest of the world. I enjoy shows about comic book characters and crime dramas
Interests: Anime, reading, movies, TV, writing, beer & watching sports
Favorite Game: Mobius Final Fantasy, Ace Combat Zero, Colony Wars Vengeance, Tekken, Armored Core Nexus, FF X-2, FF 12, Elder Scrolls 5
Favorite Music: prince, wu tang clan, yoko kanno, infected mushroom, nwa, garbage, otep, nzk, killswitch engage, (həd) p.e., tommy heavenly6, aqua timez, paul oakenfield, boom boom satellites, def leopard, eightball & mjg, ogc, polysics, versailles/jupiter, black sabbath, dio, madonna, poppy, orbital, jump with joey...
Favorite TV Shows: Gotham, Lucifer, Oddities, Deadly Women, Agents of SHIELD, Spartacus, Strikeback, Family Guy, Futurama, Daria, Star Trek, Married With Children, Babylon 5, Space: Above & Beyond, It's Always Sunny In Philadelphia, Fresh off the Boat, You're The Worst
Favorite Movies: IZO, American Psycho, Conan The Barbarian, Airplane!, Ronin, Heat, Spaceballs, Heavy Metal, The Last Supper, 300
Favorite Books: Revolt In 2100, Goth, American Psycho, V For Vendetta, Le Chavalier Requiem, Juliette, The Invisibles
Favorite Quotes: Yes, there is a conspiracy, indeed there are a great number of conspiracies, all tripping each other up ... the main thing that I learned about conspiracy theories is that conspiracy theorists actually believe in the conspiracy because that is more comforting. The truth of the world is that it is chaotic. The truth is, that it is not the Jewish banking conspiracy, or the grey aliens, or the twelve-foot reptiloids from another dimension that are in control, the truth is far more frightening; no-one is in control, the world is rudderless. - ALAN MOORE