Second Season of 'Enen no Shouboutai' Announced for Summer 2020 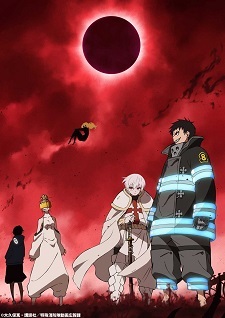 The 24th and final episode of Enen no Shouboutai (Fire Force) ended with a second season announcement for the anime series on Saturday. Subtitled Ni no Shou, the new season will premiere in Summer 2020. The official website also revealed a teaser visual (pictured).

Synopsis
Spontaneous Human Combustion: a chaotic phenomenon that has plagued humanity for years, randomly transforming ordinary people into flaming, violent creatures known as Infernals. While Infernals make up the first-generation accounts of Human Combustion, the second and third generations became known as pyrokinetics—people gifted with the ability to manipulate and control their flames while remaining human. To combat the Infernal threat and discover the cause, the Tokyo Armed Forces, Fire Defense Agency, and Holy Church of Sol produced their answer: the Special Fire Force.

Young and eager third-generation pyrokinetic Shinra Kusakabe, nicknamed Devil's Footprints for his explosive ability to ignite his feet at will, becomes a member of the lively Special Fire Force Company 8. Upholding the brigade's duty to extinguish the blazing Infernals and lay their souls to rest, Shinra is determined to become a hero who will save the lives of those threatened by the flame terror.

However, this is not the hero's game Shinra imagined. The Fire Force is a fractured mess of feuding brigades, abnormal Infernal sightings are increasing all over Tokyo, and a shadowy group is claiming to have answers to the strange fire that caused the death of Shinra's family 12 years ago. Faced with many obstacles within and outside the Fire Force, Shinra fights to uncover the truth behind the burning mysteries that have kept him in the dark. [Written by MAL Rewrite]

The television anime by David Production premiered on July 6. Crunchyroll simulcast the show with subtitles, while Funimation streamed an English dub. The latter plans to ship the first 12 episodes on Blu-ray and DVD on March 31, 2020.

Kodansha Comics licensed the manga in English in 2016 and published the 17th volume on November 26. The 18th volume has a scheduled release date of April 21, 2020.

Enen no Shouboutai was nominated for the 41st Kodansha Manga Awards in the Shounen category in 2017.

I personally am really looking forward to another season of this but I just hope that they all but get rid of all the ridiculous fanservice. It honestly took this show down a whole point for me but overall it was quite enjoyable and has potential.

all we want is stone ocean anime

I really enjoyed the first season, let the next one come!

I was really hoping this would be continued, hopefully it gets the same love and effort put into it as S1.

My body is ready.
This show is incredible and I can’t wait for this season. I hope it’s animation is just as good as the first season.

Eh, looks like I really need to get back in to anime again in 2020.. I lost track of anime this year execpt for a few..

I did remember I've read the manga a little.. with the 2nd season in store, maybe I should just watch the anime first.. XD

It’s an ok series from my point of view, so I’ll watch the second season.

Another anime that I watched this season getting a sequel, very nice!

I don't know who is hating on this anime or why, but I honestly rate it a 10/10, which is pretty rare for me.

Really hope they do the second season as great as this one.

Good. This show was great. Action was top notch.

Still can't figure out the hate for it, unless it's all just because of the fanservice...

I guess there's room to criticize the plot being a simple darker shonen with mysterybox elements... but even then, it wasn't even worse than half the things this season.

This is one of the best sakuga fest of the season. Sure its trope-city but fun enough to watch.

The people saying it's all about online streaming revenue now couldn't be any more wrong. It did work for Dr. stone not all anime will cut through and get 2 season just because it did good via streaming only reason Davidpro is doing S2 because it's in there contract for animating this garbage for 4 cours i bet they are regreting this decision.

no, bye and never come back.


RayReynolds said:
Fuck second season? But if this anime had been a complete failure in Japan, or did Crunchyroll also save it?

Because BD sales are completely irrelevant for years. Streaming in and outside of JP in the asian market, and other venus of money are the thing that makes it.

in that case, why tear studios went bankrupt?

I just hope it covers what it can and doesn't try and do an anime only ending.
Can't wait to see some awesome Captain Obi moments if it does.

Also all this hate is odd, there are worse shounen and it's not like this series has a rabid annoying fanbase like a lot of other shounen.
There's only one reason I can think of: JoJo fanboys are upset David Productions deem to make this right now, instead of part 6.

With great pity and discontent awash am I
deg said:


disc sales does not matter anymore lol legal streaming profit is the new king
Everyone can clearly see that the more sophisticated viewer base does not encourage such second-and-half rate stories anymore. Thus it comes to the westerners to protect this series' future... and to damage the industry.

excited to see these next arcs animated with how well a production David Pro gave this. it may have flaws but i think the positives outweigh that. cast is fun imo

Can't wait for the second season. I really like the creepy aesthetic with characters like dr. Giovanni. It makes it stand out from other shonen in that regard.


Dr. Stone did well in Japan, just look at the Weekly Shonen Jump rankings. Plus, without the support of the Japanese fanbase, it's extremely hard for anime to get second seasons because they are the primary consumers

I wasn't talking about DVDs/discs though I was talking about WSJ rankings. There's this Crunchyroll megathread with weekly WSJ results. Check it out and you'll see what I'm talking about. Anime has exploded in popularity outside of Japan but the lions share of the revenue goes towards third-party licensing companies and the likes so the audience that truly matters are the Japanese. It would be impossible for a show to be continued just based on Western viewpoints alone if the Japanese didn't like the show

There's no such thing as WSJ rankings. The TOC from WSJ isn't about popularity, it's about positions that the editorial gives to their manga for promotional values. Which is extremely clear when Dr. Stone always is up there but many manga below it sell much more than it. Dr. Stone is high since before the anime because the editorial promotes it, much like they did for some years with Black Clover.

Of course WSJ rankings exist. And it is contingent on sales and popularity in Japan. If that was the case, Dr.Stone would be placed even higher.

No, they don't. What exists is the TOC (Table of Contents), there's no ranking there. It's a bunch of manga put on different positions every week by the editorial from a promotional perspective. Dr. Stone is always high and it sells much less than Black Clover, Jujutsu Kaisen and many other series. Same is true for other series that are high but sell less than others. Because it's not about popularity, it's about the editorial promoting that series in the week with the series appearing first than others.

Popularity in Japan you will see from the sales of tankobon volumes, not via the TOC. In the toc you only look at it to see which series will get cancelled as newbies are more dependent on the TOC, if a series stopped being promoted by the editorial, which series are more promoted, etc. Not about popularity per se and definitely it isn't a point to show how popular a series is, even more when many series that appears high sell less than many others.