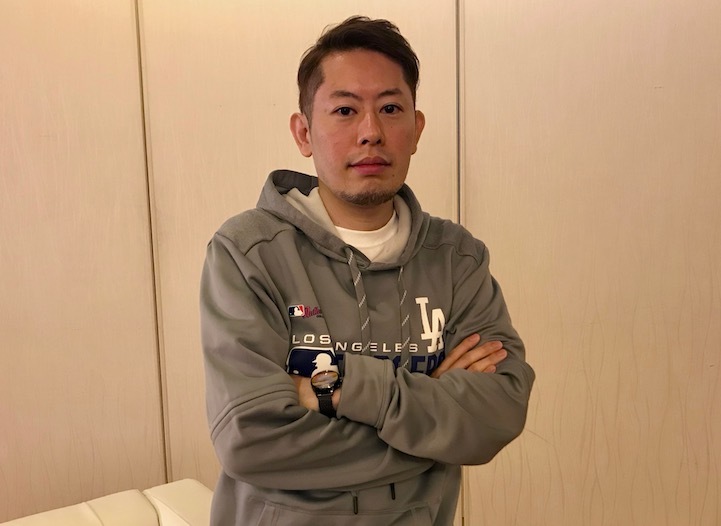 Author Atsushi Ohkubo is a near 20-year veteran of the manga industry, known for his quirky characters and worldbuilding. His breakout series, Soul Eater, has sold 19.6 million copies worldwide. Ohkubo's stories also lend themselves well to animation. Earlier this month, his latest work—Enen no Shouboutai (Fire Force)—became his third manga adapted for television.

MyAnimeList had the opportunity to sit down with Ohkubo and discuss Enen no Shouboutai at Anime Expo 2019, where the TV anime adaptation premiered.


Growing up, what was your favorite manga? Which mangaka influenced your art and storytelling?

My favorite manga was Dr. Slump—I read it over and over. My storytelling and character designs were influenced not by manga, but by movies. I really like David Lynch movies and horror movies in general.

Are there any specific manga or other works that influenced Enen no Shouboutai?

When I was working on Soul Eater, Tim Burton's movies were a big influence, but when it comes to Enen no Shouboutai... it's difficult to say. There wasn't anything in particular, maybe steampunk movies in general, like The City of Lost Children (La Cité des enfants perdus).

You switched from publishing your previous works in a monthly magazine to Weekly Shounen magazine for Enen no Shouboutai. Did you encounter any challenges pacing yourself with the switch?

Surprisingly, I didn't find the transition very challenging. If anything, I think drawing monthly is rather difficult. The only difference is that for monthly, you have one to submit per month. If you wait until the very last minute, you have to rush. For weekly, the workload is definitely greater, but it's easier to set a rhythm. Monday I'm gonna do this, Tuesday I'm gonna do this. So, they both have their pros and cons.

Is there anything you wanted to do differently in your original idea for the Enen no Shouboutai manga that your editor opposed and did not make it into the final manga?

Was there something? (laughs) More than that... it was the opposite, and anything I wanted was okay (laughs again). In our meetings, these silly ideas come up—those we make sure won't be added to the manga. But as we discuss silly ideas, sometimes something good comes out of it.

Was there a specific design influence, in real life or fictional, for the Solar Era Tokyo setting?

As mentioned before, the steampunk movies did influence a lot of the setting. Also, it's not modern Tokyo. What I had in mind was more like Meiji or Taisho era, or a bit before then when Japan was still developing. 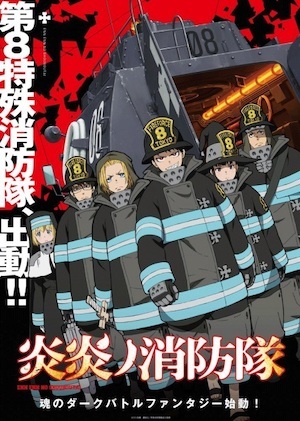 A noteworthy detail is that each fire brigade headquarters' architecture is different. For example, the eighth is a fusion of a cathedral and a fire station, while the seventh looks like an Edo-style temple. How did these different types of buildings come about?

The eighth, I look at like a standard fire station, while the first station has more of a religious theme, so the building definitely represents those kinds of qualities. The seventh is a very traditional Japanese fire station. It's like the old types that had big fans to put out fires. Each building really represents the theme of its team.

It's true that the team units are also very different, each with their own specific style.

Also, there is a company called Haijima Industries, which is the largest company in Tokyo, also supports the Special Fire Force with cars and weapons that have strong corporate undertones, and there are additional factions around that. Well, there are various units for each faction, and the Japanese headquarters are independent and have an unconventional atmosphere.

In Enen no Shouboutai, characters have different types of levels of power, like second generation or third generation. What do these levels mean?

Which of these generations do you think you would like to be, and why?

The first one, because it burns and goes crazy and dies. (laughs)

Early in the story, we hear "Látom" recited at the end of a nun's prayer; it's similar to an "Amen." We found the same word in Hungarian, but its meaning didn't give much insight. What does it mean to you?

The church in Enen no Shouboutai is a solar religion that worships the sun. "Ra" is the name of the Egyptian sun god. Then the Japanese word tomurai [弔い, meaning: condolences, mourning, funeral] is mixed in.

So it's a coincidence that it's a Hungarian word?

What does it mean in Hungarian?

What led you to decide that the main character—and your favorite character, Shinra—should have a forced smile when nervous?

In general, I like to draw the toothy smile. I used it in Soul Eater and wanted to implement it in this manga. This time, the protagonist has to kill these people for his job, and he's not supposed to smile, but ends up smiling anyway when he's nervous. The simple reason why I like to use a smile is that the smile has many meanings, and I like this symbol. 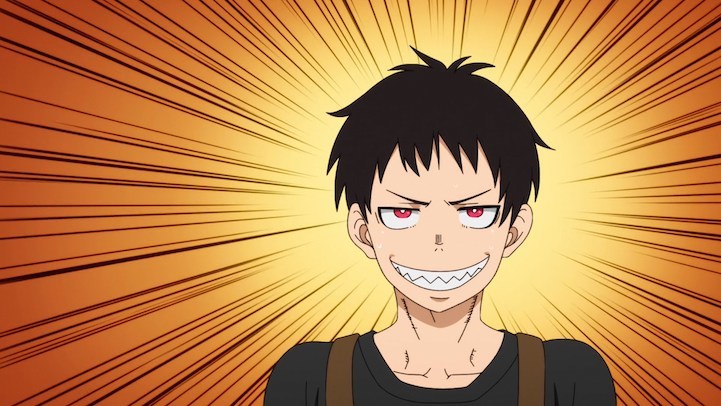 What concepts or ideas do you hope to explore in Enen no Shouboutai that you did not get a chance to do in your previous works?

I have to say the concept of "life." The way I approached Soul Eater was completely different from Enen no Shouboutai because in the former, they're brutally killing and sucking up souls, but in the latter, I want to show the importance of each life by saving people. That's something I'm definitely taking a different approach toward and really want to explore.

In the manga, your editor's favorite character, Arthur, wields a sword named Excalibur, just like King Arthur did according to legend. And this, of course, is not the first time an Excalibur appeared in your work. Between the Excalibur in Enen no Shouboutai and the Excalibur in Soul Eater, which do you think is more powerful?

Well, it's a personal story. The Excalibur in Soul Eater, it talks and talks so much—it's terribly annoying. Even though it's a sword with great power, no one uses it because it's too annoying. There is no sword here, but the original intent of Excalibur was a character no one found useful, and Arthur in this story also became a foolish character that people only find lightly useful. I think they are strongest when paired.


MyAnimeList thanks Anime Expo, Funimation, and the talented Atsushi Ohkubo for this interview opportunity.

Interview was conducted through an interpreter and has been edited for clarity.
Anime ExpoMangakaInterview

His works are hardly mediocre lol yu must be bigheaded as shit to think that. Quit trying to diss others for showing their love to an artist and do something better with ur life

regardless of it´s literary value or whatever you´re using as a standard for quality, Soul Eater is considered a modern classic.

I didn't encounter anyone who considers it a classic, and its very far by it , since its a pretty badly written shounen. One of the worst of its time actually

regardless of it´s literary value or whatever you´re using as a standard for quality, Soul Eater is considered a modern classic.

Tista said:
I swear, everytime i someone's photo in the news section i immediately think that he or she died.

Nice interview tho. I maybe will watch it when the season ends. Have to think about that a little more.
a couple of days ago, I read one of those and in the `related articles`section there were a like 3 or 4 articles about other mangaka/seiyuu dying, and in beteen those was one about Hajime Isayama getting married. You can´t make this shit up xD

Just ur opinion. I'm a big fan of his art, especially in soul eater which i'll admit isn't perfect, but an all around solid shonen in my opinion, and fire force just keeps getting better (mainly the manga).

Well art and animation are one thing, many anime are getting overhyped/overrated with garbage story and good animations. I usually don't consider those when talking about a story.

Just ur opinion. I'm a big fan of his art, especially in soul eater which i'll admit isn't perfect, but an all around solid shonen in my opinion, and fire force just keeps getting better (mainly the manga).

I swear, everytime i someone's photo in the news section i immediately think that he or she died.

Nice interview tho. I maybe will watch it when the season ends. Have to think about that a little more.

Nice interview. I like dude style of drawing too.

Mango-man-dangO said:
This guy is currently my favourite mangaka

This guy is currently my favourite mangaka

nice interview, congrats to MAL for doing it!

Thanks for doing the interview, it was a fun read!

Great interview, his art improved greatly over the years.

Nice interview, please do more with another manga artist.

Nice interview with spot on questions. Glad mal didn't ask about promare. I am curious about when does he wanna end enen no shobotai.

Most of the interview is about the manga with a mangaka and the illustrations are all anime. lol

Great interview, keep up the great work MAL team and a big thank you to the interviewers and interviewee!

Lol @ that little coincidence bit and I find it very interesting that he finds the Weekly Serialisation more down to Earth, sounds like he’s quite the procrastinator like me xD. I’m looking forward to seeing how he handles the concept of “life” too in the future episodes!

Looking forward to the next episode even more now, pity that it won’t come out until a while however.

"Which of these generations do you think you would like to be, and why?

The first one, because it burns and goes crazy and dies. (laughs)"

my favorite things from Enen no Shoubutai/Fire Force manga are the artstyle and fighting coreographic, Read until volume 8 so far and i have a lot of favorite moment in the manga like so Latom is a made up word by the author eh