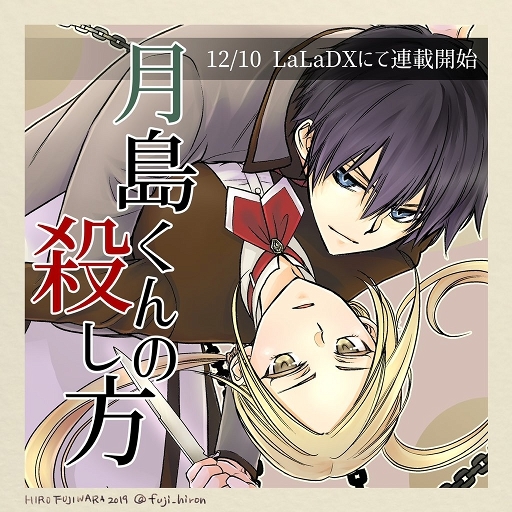 Kaichou wa Maid-sama! author, Hiro Fujiwara, announced her news series will be titled Tsukishima-kun no Koroshikata and its first chapter will be released in LaLa DX's next issue, on sale December 10. While the magazine normally releases bi-monthly (on even-numbered months), Fujiwara has requested a less frequent schedule for the series, and chapters are expected to serialize quarterly.

Fujiwara debuted in Lala DX's May 2004 issue, winning the 145th LaLa Mangaka Scout (LMS) Best Rookie award for her one-shot Kaerimichi, Yuki no Netsu under the penname Hiro Izumi. After publishing a number of other one-shots in Lala and Lala DX (and changing her penname to Hiro Fujiwara), the author began her prominent work Kaichou wa Maid-sama! on Christmas Eve, 2005 in LaLa.

Kaichou wa Maid-sama! (Maid-sama) was serialized for almost eight years in LaLa, finishing in September 2013 for a total of 18 volumes. Multiple side-stories were later published in various LaLa DX issues in 2017 and 2018, which were compiled into one volume Kaichou wa Maid-sama!: Marriage released on August 3, 2018. The series inspired a 26-episode anime adaptation in Spring 2010, animated by J.C.Staff. The manga and anime currently rank 29th and 79th, respectively, on MyAnimeList's most popular titles.

Fujiwara's next series, Yuki wa Jigoku ni Ochiru no ka, was serialized in LaLa from February 2014 to September 2016, and totaled six volumes. Since its conclusion, Fujiwara has only published a number of original and side-story one-shots; Tsukishima-kun no Koroshikata will be her third series.

I still cant find chapters of this huhh

Her art style improved a lot.

The knife makes it looks like this is some kind of revenge manga. Hope its not :/
Its good to see her art again tho

hope this time the female lead is not garbage like Misaki :)

I like the art, hopefully it is something with a serious plot, maybe dealing with Assasinations or such things.

the cover art looks good! Hopefully this is as fun as KWMS was. I get nostalgic every time I remember the KWMS theme song.. what fun time it was.

side note, I hope it doesn't become like Kaguya-sama where every chapter is just them trying to one-up each other.