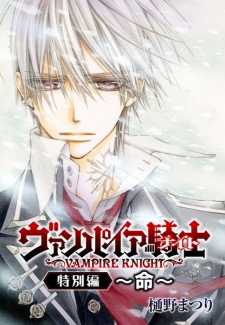 The official website of LaLa DX has announced that the magazine's July 2016 issue, which will go on sale on June 10, will launch a new serialization of the manga Vampire Knight.

In a blog post by mangaka Matsuri Hino, she indicated that the serialization will be a regular publication of Vampire Knight Tokubetsu-hen. That collection had been publishing irregularly as a series of one-shots in LaLa Fantasy and LaLa DX since 2013, and the first compilation volume (pictured) is scheduled to go on sale on June 1, 2016.

hmm where are they going with vampire knight these days??? I might watch for the hawt doods ya know :P

I don't know if its the magazine, the editor, or Matsuri Hino-sensei, but i think they should this series rest in peace already.

Maybe it'll be about the pro and anti vampires since it seems humans finally know about vamps which was hinted in the seiren chapter. It's nice to see the backstory and that she was human.

Why! Just why!
Is it to cover at least some of the plot holes, to give a backstory and character development to most of the characters or simply to milk it as much as it can be ?
The story is way past redeeming...
Just why...

(FYI, I finished her VK manga years ago and literally everyone wanted to erase that awful, awful ending from their minds.)

Martin_Erickson said:
The ending in the anime sucks!
The manga ending sucks more. Believe me.

I hate this manga !!

I really feel bad for Zero.

This story had so much potential to be a dark and beautiful masterpiece but then mangaka san went and butchered it. Its beyond sad when that happens.

Then ending wasn't great but i'll still probably read it.

No thanks. The anime turned me off enough.

Kaname and Zero should've gotten together and all would've been merry D":

What's dead should be left dead.
I can hear Kaname crying in his grave.

Finished VK awhile ago and well, I'm not too keen on checking it out but good for the fans.

Well I finished this last year and when I found out it was finished I cried inside because I was left with such a big cliffhanger. I mean I want some insight on what happens after at least. But to know that this is coming out soon makes me happy :3

Well based on the comments here I guess I won't be starting this series.

very bad time to come if you ask me ...considering current situation of anime that we all know isn't only limited to japan and some fan girls anymore, it will get slammed

I'll probably read it, even though I thought Vampire Knight's quality declined in later volumes (provided it gets translated into English).

CG-Silver said:
I actually really disliked this series so the news doesn't interest me.
^^ a post i can relate to.