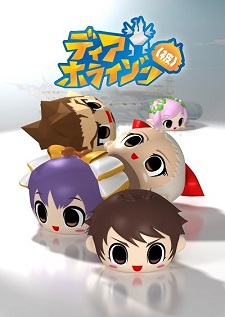 The details for the previously announced and upcoming Dia Horizon TV anime have been announced on Monday. Titled Dia Horizon (Kabu), the anime will air on Tuesdays at 1:00 a.m. for a duration of five minutes on Tokyo MX starting October 3. The comedy short anime will have total of 12 episodes, and the story will be different from the cellphone game, web light novel, web manga, and short web anime adaptations, which were already released for the project this Summer.

I just saw the CM that made available few hours ago reads "Kabu" instead of "Hi", which makes sense because "Kabu" is from :"Kaburu", which means to cover / pull over (the kanji reads Hi, too, but not sure which one, so I just chose the easiest reading. I'm sorry for the mistake).

This is both sad and funny at the same time...

lol that previous PV is misleading

LOL WHAT? I thought this was going to be like Granblue Fantasy or something... Damn.

wait, what? I had read the synopsis and saw the visuals so I was kinda looking forward to this... now apparently it's just a silly 5 min. anime that has nothing to do with what I expected lmao

time to remove it from my ptw I guess

Sigh, I actually had interest in this too. RIP.

is this some kind of joke

This is Ikemen Sengoku all over again.

EGOIST said:
So you're telling me those key visuals earlier were fake? Lmao and I thought this was going to be TV length
Apparently they were for game.
Robiiii said:
What was the point of making that previous pv in the first place??? Tell me!
The PV that was initially out was for the whole project, which looks like mainly for cellphone game. TV Anime for Fall 2017 (this news) is just a part of the project.

What a atrocious looking thing.
What was the point of making that previous pv in the first place??? Tell me!

That's not the same key visual I saw last time for this anime. xD

So you're telling me those key visuals earlier were fake? Lmao and I thought this was going to be TV length